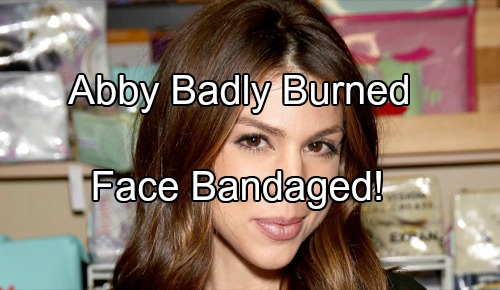 “Days of Our Lives” (DOOL) spoilers tease that Chad (Billy Flynn) will receive disturbing news from the psychiatric hospital. He’ll learn that a fire broke out at Shady Hills. Chad won’t understand how this could’ve happened.

He thought he placed Abigail (Kate Mansi) in a safe, well-maintained institution.

Chad will have some suspicions about what started this fire, but his primary concern will be Abigail’s condition. DOOL spoilers reveal that Chad will head to the facility with Marlena (Deidre Hall).

He’ll demand to see Abby in hopes of providing some comfort.

Chad will worry that Abby has suffered injuries and severe emotional distress. His fears will be confirmed when he gets a chance to speak with Abigail. “Days of Our Lives” spoilers indicate that Chad will be devastated by the sight of his wife.

Her critical burns will require bandages and even a mask on her face.

Speaking of that mask, it looks “Days” debated whether or not to go with it. In a new Soap Opera Digest interview, Kate Mansi hinted that there were several script revisions and a long thought process behind her final scenes. After much consideration, the show decided to use the mask in preparation for the new Abigail actress, Marci Miller.

It appears Mansi wasn’t entirely on board with the idea since the mask wasn’t really necessary to keep the character around. When Billy Flynn was brought in as a recast, we just accepted Chad’s new look without an explanation. It’s not a big deal in the soap world.

Nevertheless, facial reconstructive surgery seems to be in Abigail’s future. Abby’s husband, friends and family members will have to adjust to her new face just like viewers will. Marci Miller will debut in the role this fall, but what happens between now and then? Abigail will simply disappear…

Of course, we have to address this fire before we get to Abby’s vanishing act. “Days of Our Lives” spoilers say Chad will be heartbroken when he hears the real story behind the blaze. Abigail will insist that she saw Ben (Robert Scott Wilson) and had to do something.

It sounds like Abigail was delusional and set this fire herself.

This storyline is definitely a tearjerker, but maybe there are better days ahead. Let’s hope that “Chabby” will have a happy reunion once Miller takes over in autumn. Stick with DOOL for updates on Chad and Abigail’s future.

So “Days” fans, what do you think about Abigail’s ordeal? Are you OK with the mask or is it pointless? Are you anxious to see how they explain Abigail’s upcoming disappearance?