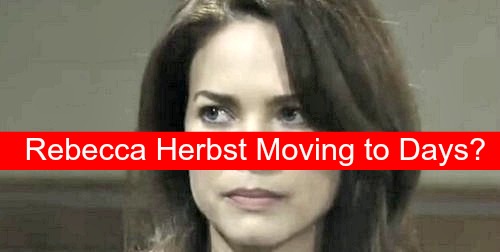 “Days of Our Lives” spoilers reveal that the NBC soap may be hoping to snag a popular soap star from “General Hospital.” Contract negotiations recently broke down between GH and Rebecca Herbst (Elizabeth Webber). The execs reportedly gave Herbst an insulting offer and as a result, her time in Port Charles could be over.

The good news is that Salem would be happy to have Herbst. DOOL buzz hints that the show is VERY interested in bringing Herbst on board. By hiring an experienced performer, it reduces the risk when it comes to new characters.

Of course, there’s always the possibility that Herbst wouldn’t be portraying a new character at all. There’s been a lot of chatter on social media about the idea of Herbst stepping in as an Abigail Deveraux recast. Kate Mansi departed the role and we haven’t been given any updates on her replacement yet.

Some “Days of Our Lives” fans just can’t envision Herbst as the new Abigail. Although most viewers seem impressed by Herbst’s acting ability, she’s a considerable amount older than the character is supposed to be. There would be a huge difference in how Abigail comes across.

DOOL could age Abigail a bit, but that might leave things looking awkward on screen. Melissa Reeves (Jennifer) is only 10 years older than Herbst, so playing Abigail’s mother would be a stretch. We also have baby-faced Billy Flynn (Chad) to think about. Would “Chabby” still work as well? It’s tough to say.

Then again, there have been cases where actors and actresses are able to pull it off in this type of situation. It’s common for performers to portray characters that are slightly younger than they are. A fresh face and a little makeup are sometimes all it takes.

Another idea might be to bring Herbst in as a Sarah Horton recast. “Days” could use more Hortons around anyway. Maggie (Suzanne Rogers) needs her daughter nearby now that Daniel (Shawn Christian) is gone. Sarah hasn’t been seen in town since 1991 and Herbst could easily make the role her own. It would be a blank slate, but with the added bonus of a tie to a core family.

Will General Hospital’s loss be DOOL’s gain? Time will tell, but they might be smart to snatch Herbst up. She has a passionate fan base that could follow her to “Days of Our Lives.” We’ll let you know if we hear anything else about Herbst’s potential soap switch.

So “Days” fans, what do you think about the possibility of Rebecca Herbst joining the cast at DOOL? Do you feel it would be a good move? Would you prefer to see Herbst as a recast or a brand-new character?

Voice your opinion in the comments below and don’t forget to check CDL often for the latest “Days of Our Lives” and “General Hospital” spoilers, updates and news.