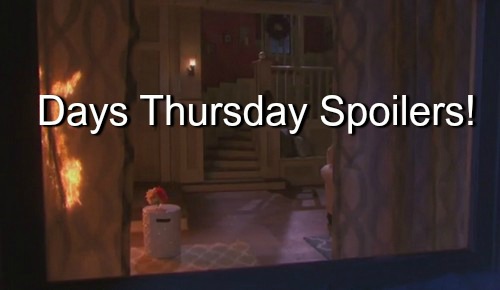 “Days of Our Lives” spoilers for Thursday, February 11, tease that everyone will be in a panic at Hope’s (Kristian Alfonso) house. Andre (Thaao Penghlis) made sure Chase (Jonathon McClendon) went home with a phone that could burn the whole place down. Chase’s backpack burst into flames and now Hope will frantically try to stop the fire from spreading.

DOOL spoilers say Hope will manage to get the blaze under control, but the incident will really shake her up. Hope will take Chase and Ciara (Vivian Jovanni) to Jennifer’s (Melissa Reeves) house. She’ll come back later to assess the damage. It will quickly become clear that this fire was Andre’s handiwork.

Of course, this is only the beginning of the chaos Andre has in store. Chase doesn’t realize he’s a pawn at this point, but he could eventually decide to help Andre willingly. Their twisted friendship is going to cause nothing but trouble over the next few weeks.

In the meantime, we’ll see more drama play out for Steve (Stephen Nichols) and Kayla (Mary Beth Evans). “Days” viewers know that Steve promised to tell Kayla everything as soon as he returned from his trip with Ava (Tamara Braun). However, it appears Steve will leave out one crucial detail.

Steve slept with Ava to secure Kayla’s freedom, but he understands how much it would hurt “Sweetness” if she learned the truth. “Days of Our Lives” spoilers say Kayla will want answers about what happened, but Steve will try to placate her without revealing the entire story. Unfortunately, soapy secrets always blow up sooner or later. It sounds like Steve will have some explaining to do down the road.

Elsewhere, John (Drake Hogestyn) will make a dangerous decision. DOOL spoilers indicate that John will be determined to destroy the organization that turned him into an assassin. This mission will undoubtedly be risky, but John doesn’t want to live his life in fear. If John doesn’t take care of this now, the agency will haunt him for the rest of his days.

Marlena (Deidre Hall) won’t be happy about John’s news, but his mind will be made up. John knows that he has to bring down these menaces once and for all. Is John up to the task? Stick with “Days of Our Lives” for updates on John’s quest to defeat this massive threat.

So “Days” fans, what do you think about Andre’s sneakiness? Will Chase remain oblivious to Andre’s scheming? Will Kayla suspect there’s more to Steve’s story? How will John bring down the organization? Voice your opinion in the comments below and don’t forget to check CDL often for the latest “Days of Our Lives” spoilers, updates and news.