Days of Our Lives (DOOL) Spoilers: Jennifer Wants Custody, Get Thomas Away from Evil DiMeras – Chad Struggles to Keep Son 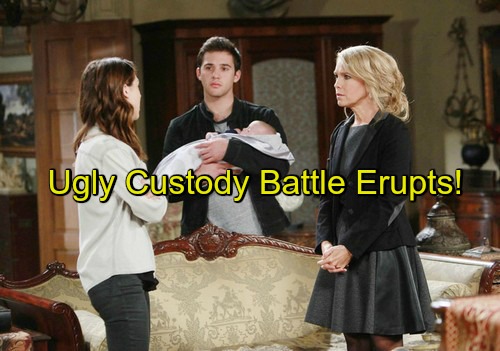 “Days of Our Lives” (DOOL) spoilers tease that Jennifer (Melissa Reeves) has some dark times ahead of her. Jen is sinking deeper into her addiction every day. Several close friends and family members have noticed Jennifer hasn’t been acting like herself.

Lucas (Bryan Dattilo) insisted that he knows a junkie when he sees one, but Jennifer continued to deny the problem. That’s classic addict behavior as well. DOOL spoilers indicate that rock bottom is on the way for Jennifer and it won’t be pretty.

Plus, “Days” viewers know that Abigail (Kate Mansi) fears she’s losing her mind. Jennifer hates to see her daughter like this and it’s only adding to her issues. Nevertheless, a visit from a ghostly Jack (Matthew Ashford) will put Jennifer on the path to recovery.

Once Jennifer finally cleans up her act, she’ll be ready to take on a bigger role in her grandson’s life. As we mentioned, Abigail is struggling to maintain her sanity. DOOL buzz suggests Abby will probably be headed to a psychiatric facility.

With Abigail out of the picture, Jennifer will turn her attention to removing Thomas from the evil DiMera environment.

“Days of Our Lives” spoilers say Chad (Billy Flynn) will do his best to take care of his son, but Jennifer won’t trust him. She’s still wary of Chad’s family and their ruthless tendencies. It’s worth mentioning that Andre (Thaao Penghlis) will be out of jail soon.

Jennifer may worry that Thomas could be the next pawn in the DiMera dynasty if she doesn’t rescue him now.

It looks like Chad could have quite a fight on his hands. In a recent interview with TV Insider, Melissa Reeves confirmed that Jennifer will push for custody of Thomas. Naturally, Chad will argue that Jen is a recovering druggie who could relapse at any moment. Thomas might be better off taking his chances with the DiMeras.

Will the judge side with Jennifer or Chad? Time will tell, but it’s clear that Thomas’ future is at stake. Let’s hope Thomas will end up somewhere safe – if that’s even possible in Salem. Stick with “Days of Our Lives” for updates on the trouble that’s brewing.

So “Days” fans, what do you think about the news that Jennifer plans on suing for custody? Will Jen take Thomas away from Chad? Will an Abigail recast return to major family drama this fall? Voice your opinion in the comments below and don’t forget to check CDL often for the latest “Days of Our Lives” spoilers, updates and news.