Days of Our Lives (DOOL) Spoilers: Kassie DePaiva Back as Eve – Returns for Theresa’s Funeral?

BY Heather Hughes on May 30, 2016 | Comments: 3 comments
Related : Days of Our Lives, Soap Opera, Spoiler, Television 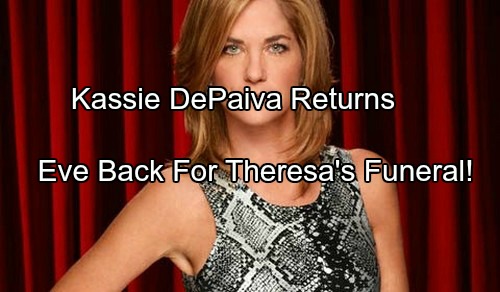 “Days of Our Lives” spoilers tease that DOOL fans will be seeing another familiar face later this year. According to Jason47’s “Days” website, Kassie DePaiva is set to reprise her role as Eve Larson. There’s been a lot of buzz about Jen Lilley’s departure and the possibility that Theresa will be killed off.

We know that Kim (Patsy Pease) and Shane (Charles Shaughnessy) will also be in Salem this fall. They recently shot scenes in St. Luke’s, so perhaps a memorial service is on the way. The somber occasion could prompt these returns.

It certainly makes sense that “Days of Our Lives” would want Shane, Kim and Eve back for a funeral. Most DOOL watchers were already saying they’d be outraged if Theresa’s family didn’t show up for a proper goodbye. Theresa and Eve were quite close. If Theresa is going to die, then Eve absolutely needs to be there.

Many viewers were disappointed when Kassie DePaiva was fired from the show. DePaiva has some serious acting chops and she proved it by scoring a Daytime Emmy nomination for her scenes as a grieving mother. Paige’s (True Brien) death brought out a whole new side of Eve’s character and we never really got to see that fully explored. In fact, Eve didn’t even get an exit storyline. She just faded into obscurity.

There’s no news about the length of Eve’s visit, but it will probably be a short trip. Still, we can all hope that Eve might return for a longer stint at some point. If that ever happens, it would be a great opportunity for “Days” to revisit a pairing between Eve and Justin (Wally Kurth).

In addition, Eduardo (A Martinez) is still in town. He’s currently trying to win back Adriana (Alma Delfina), but he obviously had lingering feelings for Eve as well. There’s some good potential for a love triangle here. It could even be a quadrangle if Justin gets involved.

Plus, it might be interesting to see how Eve processes losing her sister so soon after losing her daughter. Would Eve become stronger or bitter? This character has several layers and it would be nice to unwrap them.

Nevertheless, we’ll take what we can get of Eve. A brief popup is better than nothing! We’ll give you updates if we hear anything else about Eve’s return to “Days of Our Lives.”

So “Days” fans, what do you think about the news that Eve is headed back to the NBC soap? Are you excited to see her? Will Eve pay her respects at Theresa’s possible funeral?