Days of Our Lives (DOOL) Spoilers: Kate and Nicole’s Fiery Faceoff Over Deimos’ Affection – Nicole Falls in Love for Real 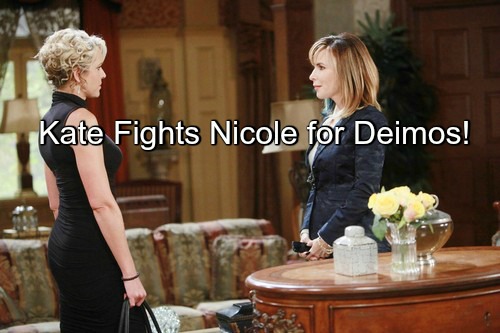 “Days of Our Lives” (DOOL) spoilers for next week’s episodes reveal that Kate (Lauren Koslow) will soon realize there’s a reason Deimos (Vincent Irizarry) has been so distracted lately. Something feels off, but Kate can’t quite put her finger on it. When Deimos offers Nicole (Arianne Zucker) the CEO position at Basic Black, Kate will be shocked.

She’ll figure out that Nicole’s the one who’s been on Deimos’ mind.

Needless to say, Kate won’t like this at all. After Kate bought Nicole and Theresa (Jen Lilley) out of Basic Black, she thought she was free of the nitwits. Kate considers herself in another league entirely. Now Kate is running Titan Industries with Deimos, but that doesn’t mean she won’t want a voice in who runs the company she brought to the table.

DOOL viewers know that Kate has a hot temper and she never hesitates to state how she feels. “Days of Our Lives” spoilers suggest that Kate will let Deimos know she’s not a fan of this idea. Later, Kate will learn Deimos has a more powerful connection to Nicole than she thought.

Once Kate finds out Nicole looks just like Deimos’ dead lover, she’ll believe Nic is moving in on her territory.

“Days” spoilers say Kate and Nicole will get into an all-out war over this. Nicole is slowly growing closer to Deimos as part of her revenge plot. Kate might suspect Nicole has an ulterior motive for trying to steal her man. Nicole will insist that she’s done nothing wrong. The company Deimos keeps is his own business.

Kate’s fears could come true down the road. DOOL spoilers tease that Deimos will be uncertain of which woman he should pick. Kate is a great match for Deimos. They both have a little attitude and they don’t let people mess with them.

On the other hand, how can Deimos pass up someone who so strongly resembles the woman of his dreams? It’s been thirty years since Helena (Arianne Zucker) died and Deimos is still pining for her. That detail probably gives us our answer on who Deimos will choose.

The real question is: could Nicole fall for Deimos as well?

We all know that fake love schemes can often turn into genuine affection on a soap. Dario (Jordi Vilasuso) tried to make sure Nicole wouldn’t stray from her mission and she vowed that she wouldn’t. However, the fact that they even mentioned the possibility raises some red flags.

Stick with “Days of Our Lives” to see if Nicole will bring Deimos down or let her heart get in the way.

So “Days” fans, what do you think about the news that Kate and Nicole will engage in an explosive showdown? Will Deimos choose Nicole over Kate? Could Nicole’s plot hit a snag if she falls for Deimos? Will Nicole be forced to make some updates to her plan?