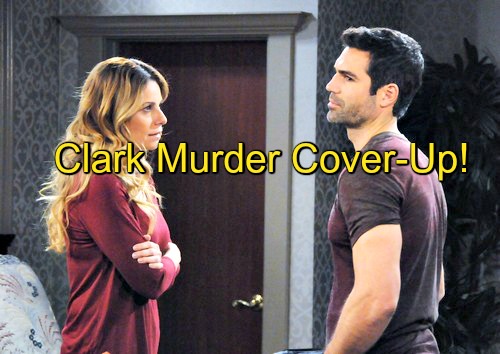 “Days of Our Lives” (DOOL) spoilers reveal on next week’s episodes that Josh Burrow will debut in the role of Clark. DOOL’s casting call described Clark as a “hot bad boy,” but we’ll soon learn he’s much more than that. Clark is someone who could turn Summer’s (Marie Wilson) world upside down and he knows it all too well.

With that in mind, “Days” spoilers tease that Clark will decide to pay Summer a visit. We don’t know the whole story just yet, but it’s obvious that Clark and Summer have some sort of history. Perhaps Clark was someone who’s been conned by Summer in the past. Maybe Clark got burned and now he wants to do a little burning of his own.

Summer will freak out when Clark shows back up in her life. She apparently thought she got rid of this problem. “Days of Our Lives” spoilers indicate that Clark will blackmail Summer in hopes of getting retribution. He’ll plan on teaching Summer a lesson and helping himself at the same time.

Dario (Jordi Vilasuso) has been Summer’s friend for a quite a while and they’ve done many con jobs together. They’ll have to do another one when Summer faces consequences for what plays out with Clark. After Clark’s threats get out of hand, a brawl will ensue. It appears Summer may snap or lash out at Clark in self-defense.

Either way, Clark will be dead before the week’s over. Poor Clark. We hardly knew ye.

That’s why Dario and Summer will have to get creative. Brady (Eric Martsolf) is usually the one who comes to Summer’s rescue, but Dario will have to take his turn. DOOL spoilers say Summer and Dario will act like they’re a couple to cover up what really went down.

Will Dario manage to clean up Summer’s murder mess? Both of these characters are pretty crafty, so we’re betting things will turn out OK for now. However, secrets have a way of coming out eventually. They may not be able to bury this indefinitely.

Stick with “Days of Our Lives” for updates on the trouble Summer will encounter.

So “Days” fans, what do you think about the news that Clark will arrive with a blackmail scheme? Will Dario help Summer get out of her jam? Can they keep the situation contained?