Days of Our Lives (DOOL) Spoilers: Nicole and Dario Team Up to Take Down Kate – Trapped In Intimate Situation 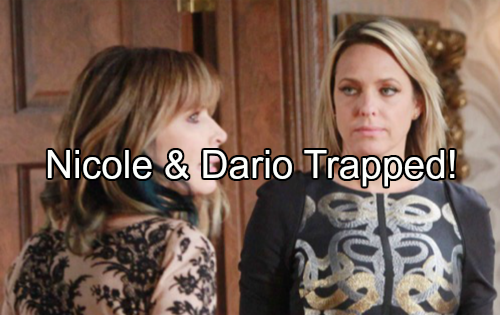 “Days of Our Lives” (DOOL) spoilers tease that Nicole (Arianne Zucker) will have a tough battle on her hands. Kate (Lauren Koslow) is doing everything she can to make sure Nicole gets locked away for Deimos’ (Vincent Irizarry) murder. Roman (Josh Taylor) expressed doubt about Kate’s story, but he has to admit that the evidence points to Nicole.

Deimos will show up alive and well eventually, but Nicole will have quite a dilemma to deal with in the meantime. DOOL spoilers indicate that Nicole will start to panic. She’ll fear that Kate will succeed in pinning this crime on her. As a result, Nicole will seek help from a few friends. First, Rafe (Galen Gering) will listen to Nicole’s emotional plea.

Nicole will state that she had nothing to do with Deimos’ alleged death. She’ll confess that they fought, but she’ll suggest that Deimos was fine when she left him. Rafe may believe Nicole’s claims, but that won’t really mean anything. If Roman decides Nicole should go to trial for this, there’s nothing Rafe can do about it.

Nicole will have to play just as dirty as Kate if she wants to get out of this mess. Naturally, that means seeking help from Dario (Jordi Vilasuso). He has a shady side and that could come in handy for this particular task.

“Days of Our Lives” spoilers reveal that Nicole and Dario will team up to take down Kate. They’ll break into the Kiriakis mansion in hopes of finding some proof to incriminate Deimos’ “widow.” Unfortunately, their plan will hit a snag. When they hear Kate and Philip (John-Paul Lavoiser) walking in, Dario and Nicole will have to think fast.

“Days” spoilers say Nicole and Dario will step inside a closet as they wait for a chance to escape. Perhaps they’ll hear something that could help Nicole’s case while they’re in there. If Kate admits something crucial, Dario and Nicole might know where to look for evidence.

Of course, the close moments these two share may be important as well. Dario is obviously interested in Nicole. If he can get her off the hook, maybe Nicole will begin to think of Dario as more than just a friend. DOOL viewers will be anxious to see where their relationship is headed. Stick with “Days of Our Lives” for updates on what the future holds for Nicole and Dario.

So “Days” fans, what do you think about the news that Dario will team up with Nicole? Will he help Nicole prove her innocence? Will Kate slip up or will we have to wait for Deimos’ return to see her comeuppance?