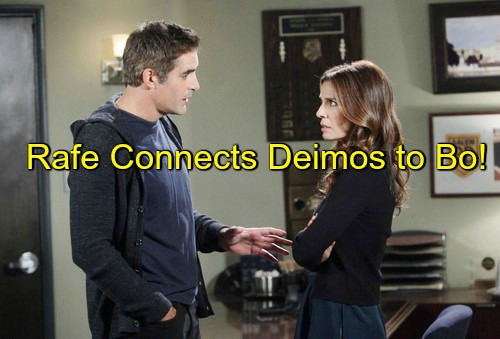 “Days of Our Lives” (DOOL) spoilers for next week’s episode on Monday, April 25, tease that Rafe (Galen Gering) will uncover some intriguing information about Deimos (Vincent Irizarry). Hope (Kristian Alfonso) recently filled Rafe in on her confrontation with the villainous Kiriakis. Deimos admitted he kidnapped Bo (Peter Reckell), but he insisted he was very careful.

He’s convinced that Hope will never prove anything.

However, DOOL spoilers indicate that Deimos wasn’t quite as careful as he thought. Rafe will find out that Deimos made an investment in a particular company. Here’s the interesting part: that company sent a payment to Dr. Malcolm (Adam Leadbeater).

Of course, this is far from solid proof against Deimos. If they really want to nail this guy, they’re going to need more. Still, it’s a step in the right direction. As long as Hope keeps her rage at bay, they may be able to go after Deimos legitimately.

Rafe will do his best to make sure Hope keeps that gun in its holster.

Elsewhere, “Days of Our Lives” spoilers say Marlena (Deidre Hall) will struggle to cope with Eric’s (Greg Vaughan) prison sentence. It looks like Marlena is missing her son already. Eric has always been a kind individual with a good heart.

Despite Eric’s mistakes, he’s certainly not a stereotypical prison thug.

“Days” spoilers reveal that Marlena will be concerned about how Eric will fare in that environment. The other inmates might gang up on this softie. Plus, Eric returned the Bible that Caroline (Peggy McCay) gave him. He seems to be losing his faith.

Marlena will confide in Belle (Martha Madison) as she tries to deal with Eric’s fate. Belle will likely suggest that Eric is a strong individual and he’ll make it through this. When you consider the fact that Eric’s actions led to Daniel’s (Shawn Christian) death, a five-year sentence isn’t all that bad.

As for Marlena, she’ll just have to accept the things she can’t change.

Fortunately, there could be a glimmer of hope for both Eric and Marlena. There have been some talks between DOOL and Greg Vaughan about a possible return. After Gabi (Camila Banus) ended up in prison for Nick’s (Blake Berris) murder, it wasn’t too long until she was back in Salem.

If nothing else, maybe we’ll see Eric’s loved ones visit him in prison. Gabi enjoyed a couple of chats with her family when she was in the slammer. Many viewers would just be happy to see Eric on their screens again.

Stick with “Days of Our Lives” for updates on the future of this popular character.

So “Days” fans, what do you think about the news that Rafe will find a connection between Deimos and Dr. Malcolm? Will this jumpstart the investigation? What about Marlena’s fears regarding Eric? Will Belle manage to comfort her mother?