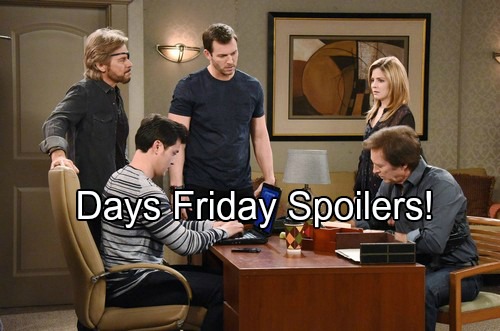 Days of Our Lives (DOOL) spoilers for Friday, July 22, tease that Brady (Eric Martsolf) and Theresa (Jen Lilley) will get into another fight. Ever since Tate disappeared, things have been tense for this couple. That’s to be expected under these circumstances. They both just want their son back.

It seems like every lead turns out to be a dead end. Theresa and Brady have more questions than answers right now. Days spoilers suggest that Tate’s kidnapping could put their relationship on a dark path. If they can’t find their child, a breakup could be looming.

Fortunately, John (Drake Hogestyn) and Paul (Christopher Sean) have been doing everything they can to crack this case. Days of Our Lives spoilers say Steve (Stephen Nichols) will get involved in Friday’s episode. He’ll want to do his part to reunite Tate with Brady and Theresa.

Steve knows what it’s like to wonder and worry about a son’s safety. Joey (James Lastovic) ran away from home, but Steve managed to track him down in California. Let’s hope Steve can follow the trail and bring Tate back to Salem ASAP.

While the hunt for Tate continues, we’ll see jealousy abound for several other DOOL characters. Dario (Jordi Vilasuso) won’t like the idea of Nicole (Arianne Zucker) cozying up to Deimos (Vincent Irizarry), especially after everything he’s done. Deimos is bad news and Dario wants Nicole for himself.

Of course, Dario isn’t exactly a saint. He has some secrets that he’s swept under the rug. Perhaps Deimos will use those to muscle Dario out of the picture. Regardless, you can expect Deimos to fight for the woman he loves.

Days of Our Lives spoilers indicate that Deimos will ask Nicole for a clean slate. He’ll request a chance to start over and form a meaningful bond. Nicole will have to think about it, but Deimos will try to show her that he’s changed for the better.

Elsewhere, envy will strike for Belle (Martha Madison) when she sees Chloe (Nadia Bjorlin) and Philip (John-Paul Lavoisier) together. Belle wants to be with Shawn (Brandon Beemer), but she’s having a hard time letting Philip go. She cares about both men, but Shawn has made it clear that he’s not interested in a competition.

Luckily, it appears Belle will keep her feelings in check. Shawn and Belle will hit a few more bumps in the road, including a big one that involves Claire (Olivia Rose Keegan). This pairing has had plenty of ups and downs, but they should be able to work through their issues eventually.

Across town, Kate (Lauren Koslow) will pack up her belongings and leave the Kiriakis mansion. She’ll be down in the dumps, but a chat with Marlena (Deidre Hall) might help. Kate will open up to Marlena about the problems she’s facing. Poor Marlena. Always stuck in shrink mode!

We’ll give you updates on what’s next for Kate. Days spoilers hint that Andre (Thaao Penghlis) and Kate could cause more chaos soon. Stay tuned to DOOL and don’t forget to check CDL often for the latest Days of Our Lives spoilers, updates and news.