Days of Our Lives (DOOL) Spoilers: Victor Stabs Nicole in the Back With Kate – Dario and Nicole Arrested, Share a Kiss 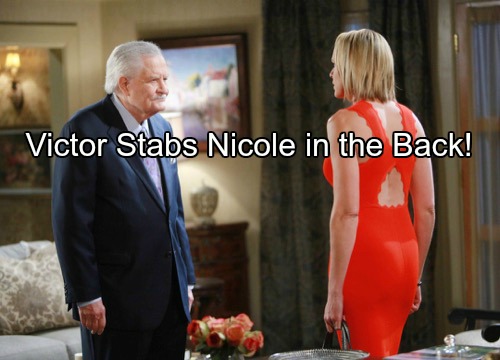 “Days of Our Lives” (DOOL) spoilers tease that Victor (John Aniston) will realize he needs to shift his strategy. Victor has been hoping to get back everything Deimos (Vincent Irizarry) stole and Nicole (Arianne Zucker) appeared to be his best option.

She bears a striking resemblance to Helena (Arianne Zucker), so Victor knew Nicole could prey on Deimos’ weak spot.

Unfortunately, Nicole couldn’t get the job done. Victor made it clear that he wasn’t happy with Nicole’s incompetence. Nevertheless, another opportunity has presented itself and Victor intends to take advantage of it. DOOL spoilers say Victor will decide it’s time to have a chat with Kate (Lauren Koslow).

He’ll think they can come to an agreement that will prove mutually beneficial.

Kate will accept Victor’s terms and they’ll move forward with the plan. Victor and Kate will have a lot to gain from this deal, but their victories will come at Nicole’s expense. “Days of Our Lives” spoilers reveal that Victor will have no problem stabbing Nicole in the back to get what he wants.

It sounds like Victor will refuse to support Nicole’s claims.

Nicole has faced questions about why she was even with Deimos of the night of his “murder.” Her story hinges on the fact that she was assisting Victor with a revenge plot. If Victor won’t back her up, Nicole will simply look like a scorned lover who was out for blood.

Dario (Jordi Vilasuso) will try to help Nicole prove her innocence, but they’ll only manage to anger Kate. After they break into the Kiriakis mansion to dig for evidence, “Days” spoilers say they’ll be caught and promptly arrested. As they handle the fallout of their actions, Dario will become increasingly drawn to Nicole.

He’ll manage to steal a kiss at the police station.

Nicole might be finding a little love in the midst of the mayhem, but more problems lie ahead. DOOL spoilers indicate that the walls will start to close in by next week. Nicole will frantically insist that Kate is to blame for everything, but her argument may continue to fall on deaf ears.

It seems Deimos may be the only one who can fix this situation.

Deimos will soon make a surprising confession to Chloe (Nadia Bjorlin). He’ll suggest that despite Nicole’s attempt to bring him down, he still has feelings for her. Will Deimos and Nicole turn the tables on Kate eventually? Stick with

“Days of Our Lives” for updates on any tricks Deimos might have up his sleeve.

So “Days” fans, what do you think about the news that Victor will throw Nicole under the bus? Will Victor and Kate pay the price for teaming up against Nicole? What will Deimos’ next move be?