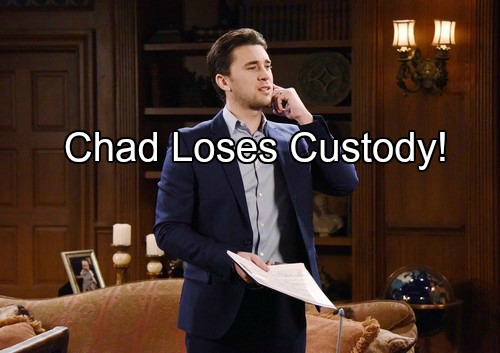 Days of Our Lives (DOOL) spoilers tease that Chad (Billy Flynn) and Jennifer’s (Melissa Reeves) custody battle will get more cutthroat than ever. Jennifer has been doing everything she possibly can to make sure Thomas is placed in a safe environment. She was even willing to ask Aiden (Daniel Cosgrove) to be her lawyer.

Naturally, Hope (Kristian Alfsonso) went ballistic over that idea. She doesn’t want Aiden involved in anything related to her family’s issues. Luckily, Aiden turned Jennifer down for now. He still cares about Hope and he doesn’t want to cause any more problems.

Nevertheless, Jennifer won’t give up her crusade. Doug (Bill Hayes) and Julie (Susan Seaforth Hayes) previously provided Jennifer with a list of top-notch attorneys in town. Jennifer needs someone ruthless if she hopes to take on a DiMera.

DOOL viewers know how much weight that name carries in Salem. The DiMeras have always been a force to be reckoned with. On the other hand, it’s not really a name that’s associated with great parenting. Chad probably realizes that his family’s history could work against him.

Now that Stefano (Joseph Mascolo) is gone, some judges may not be as fearful. Andre (Thaao Penghlis) is trying to capture Stefano’s spot as the evil head honcho, but he still has some work to do. Stefano’s shoes are hard to fill.

Speaking of Stefano, Chad will recall memories of his father as he faces this war with Jennifer. Although Chad loved Stefano, their relationship was beyond complicated. That’s something Chad has struggled to cope with since Stefano’s death.

Stefano’s guidance may ring in Chad’s ears as he mulls over the Thomas situation. Days fans will remember that Stefano urged Chad to let go of Abigail (Kate Mansi). Unfortunately, Chad will have a good reason to take that advice soon.

Days of Our Lives spoilers indicate that Chad will receive some devastating news. It seems Chad’s investigative team has gone over everything and determined that Abigail is indeed dead. We know that’s not true, but Chad doesn’t. He’ll be crushed when he believes Abigail is gone forever.

Chad may appear strong and confident around Jennifer, but he’s quite fragile deep down. He’s on the verge of completely falling apart. These heartbreaking updates will truly push Chad over the edge. He’ll sink to the pit of despair.

Days spoilers reveal that JJ (Casey Moss) will rip into Chad for putting Abigail in harm’s way. JJ will likely suggest that Chad pressured Abigail to commit herself to Shady Hills. It’s obvious that the facility made her worse, not better.

Of course, Chad couldn’t have known that things would turn out like this. Even Marlena (Deidre Hall) agreed that Abigail should check in. Abby desperately needed professional help.

Once the latest drama plays out, Days of Our Lives spoilers say Chad will throw in the towel on the custody battle. He’ll decide that he just can’t take care of Thomas while he grieves for Abigail. Jennifer will have to work through her own grief as well, but she’ll try to carry on for Thomas’ sake.

How will Abigail feel about all of this when Marci Miller debuts in the fall? Will Abby be angry at Jennifer for pushing Chad to give up Thomas? Will she feel like Chad abandoned their son? Can Abigail find a way to understand both perspectives? Stay tuned to DOOL and don’t forget to check CDL often for the latest Days of Our Lives spoilers, updates and news.