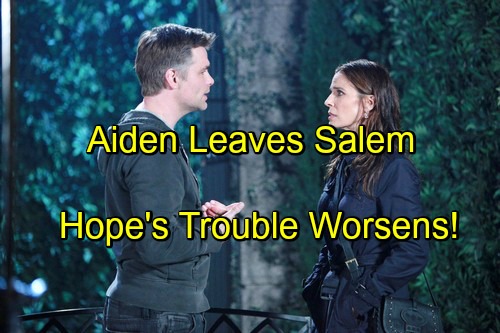 Days of Our Lives (DOOL) spoilers tease that Aiden (Daniel Cosgrove) will continue to push Hope (Kristian Alfonso) toward a reunion. He’ll insist that they can start out with a date and go from there. Rafe (Galen Gering) will notice that Aiden is putting pressure on Hope. He’ll refuse to sit around and watch Aiden make Hope miserable.

DOOL spoilers say Rafe will urge Aiden to wise up and realize he’ll never recapture what he lost. He’ll maintain that Hope and Aiden will never have a real relationship. Aiden won’t be willing to accept that. He’ll be convinced that he can win Hope over eventually.

As Rafe grows increasingly desperate, he’ll talk to Roman (Josh Taylor) about Hope’s dilemma. Rafe will explain that Aiden learned the truth about Stefano’s (Joseph Mascolo) murder. Hope could land behind bars if she tries to go against Aiden’s wishes.

Roman will hate the situation Hope has found herself in, but he may not know what to do about it. However, DOOL spoilers state that Rafe won’t give up. While he tries to come up with a solution, Aiden will have an opportunity to woo Hope. They’ll sit down for fine wine and a fancy meal.

Days spoilers say Aiden will turn on the charm, but he won’t get the reaction he was hoping for. Hope will think Aiden is coming on way too strong. He’s trying to force her to love him. Hope will mention that this is just like what Chase (Jonathon McClendon) did to Ciara (Vivian Jovanni). Aiden is almost as bad as his rapist son. 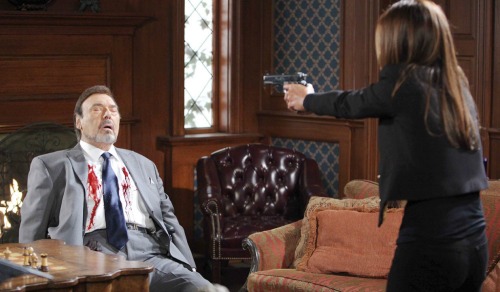 Aiden will have a shocking realization when he hears the comparison. Days of Our Lives spoilers reveal that Aiden will finally figure out that he’s become a monster. He won’t even be sure who he is anymore. Aiden will quickly determine that some changes need to be made.

Days spoilers indicate that Aiden will let go of Hope and his dreams of a future together. He’ll also decide to leave Salem behind. There’s nothing left for Aiden in this town except a terrible reputation. Aiden will likely tell Hope that he’ll always cherish the good times they shared.

There was always deception in their relationship, but Aiden grew to care for Hope. He’ll cling to those memories as he heads off to Oregon. Aiden will want to help Chase as well as himself. He’ll hope they can both become better men someday.

As for Hope, she’ll just be glad Aiden is backing off. Hope will breathe a big sigh of relief over her secret, too. Days of Our Lives spoilers say Rafe will cozy up to Hope on a surprise camping trip. They’ll celebrate the fact that this nightmare is over. Unfortunately, it’s not!

Hope may think her secret is safe, but the truth will soon be revealed to the world. It’s not clear how everything will come out, but Andre (Thaao Penghlis) could play a role in it. We’ll give you updates as other news comes in.