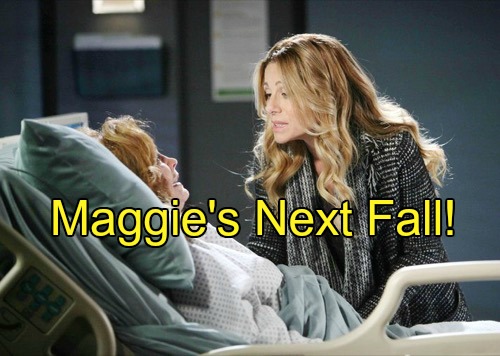 Days of Our Lives (DOOL) spoilers tease that it’ll be a difficult week for Maggie (Suzanne Rogers). She’s been through a lot over the past few months. It was tough for Maggie to deal with Summer’s (Marie Wilson) sudden appearance in Salem.

She didn’t want to think about the daughter she gave up, but she eventually found a way to bond with Summer.

Of course, Maggie was also poisoned by Deimos (Vincent Irizarry) and that led to a terrible tumble down the staircase. She was paralyzed and the surgery to help her walk again proved unsuccessful.

Maggie has been trying to ignore the struggles she’s facing, but it looks like she’s about to be reminded of how much her life has changed.

Days of Our Lives spoilers say Maggie will end up falling once again. She’s currently confined to a motorized wheelchair, which she undoubtedly has trouble getting in and out of. Maggie will hit the floor and it should leave her feeling pretty low.

This isn’t the first time Maggie has faced a crippling injury. She was forced to use crutches on the farm when she was a young girl. Maggie recovered then and we’re betting she’ll recover from this, too. Some miracle cure should be found sooner or later. That’s just how soaps roll.

Nevertheless, Maggie will have to cope with plenty of heartbreak in the meantime.

To make matters worse, some awful details about Summer will emerge this week on DOOL. Days spoilers indicate that Brady will realize Summer has been lying to him. She took the money Brady handed over to Clark (Josh Burrow).

On top of that, Summer covered up Clark’s death with a little assistance from Dario (Jordi Vilasuso).

Things are clearly going downhill for Maggie at the moment. She was finally starting to trust Summer, but this news could make her rethink that idea. Days of Our Lives spoilers reveal that Maggie will get updates on Summer’s recent swindling. She’ll be hurt by Summer’s deception and the issues that keep coming up.

The arrival of Clark’s sister, Janet (Alla Korat), will play a big role in how all of Summer’s shadiness comes out. Brady will confront Summer and she’ll ultimately make a full confession. After this blows up, Brady will think it’s best for Summer to leave Salem.

Summer’s departure will mean more strife for Maggie. She was just getting used to having Summer around. Now Maggie is going to question everything she thought she knew about her. Summer’s next move is sure to leave DOOL viewers on the edge of their seats.

Stay tuned to see the chaos that’s on the way.

So Days fans, what do you think about all of the turmoil Maggie has faced? Will she ever find any peace? Will Maggie’s upcoming fall cause another setback? How will Summer’s exit affect this weary woman?