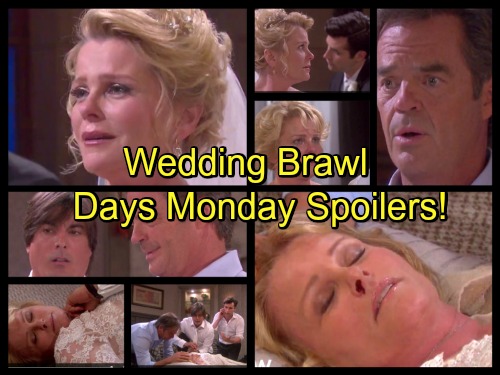 Days of Our Lives (DOOL) spoilers for Monday, November 21, tease that Justin (Wally Kurth) will pour out his heart to Adrienne (Judi Evans). He’ll explain that he lost his way for a while, but he truly loves her. After a chat with Sonny (Freddie Smith), Justin recalled fond memories. He realized that he shares a special bond with Adrienne and he doesn’t want to let it go.

Of course, Lucas (Bryan Dattilo) isn’t pleased by Justin’s sudden change of heart. He had no clue that Justin was even thinking about a reunion. Now that Justin has disrupted the ceremony, Lucas will have to defend his spot in Adrienne’s life. After Justin’s heartfelt speech, Lucas will make one of his own.

Days of Our Lives spoilers say Lucas will remind Adrienne that Justin really hurt her. His affair and nasty attitude tore the couple apart. Lucas will suggest that he can give Adrienne true trust. He’ll promise that he would never cheat on her. Adrienne is the only woman that Lucas wants.

Justin will insist that he made a mistake and he won’t be repeating it. He’ll beg Adrienne to give him another chance. Days spoilers state that the conflict will begin to heat up. Punches will be thrown as Lucas and Justin vie for Adrienne’s love.

Adrienne will finally decide that she can’t get married in this hostile environment. She’ll postpone the wedding so she has time to mull all of this over. DOOL spoilers indicate that Lucas won’t be happy, but he’ll try to respect Adrienne’s wishes. She’ll have a lot to think about over the next few episodes.

Meanwhile, Joey (James Lastovic) will drop a bomb on Kayla (Mary Beth Evans). Days of Our Lives spoilers say Joey will announce that Jade (Paige Searcy) is pregnant. Kayla will be thrown for a loop as Joey explains the situation. She knows Joey isn’t ready to be a father, but it seems he’ll just have to figure it out.

Other Days spoilers reveal that Abigail (Marci Miller) will push her mom to keep her secret. Jennifer (Melissa Reeves) promised she wouldn’t tell anyone that Abigail is alive and back in town. However, Jen will wonder if that’s what Abby wants deep down.

Abigail will confess that part of her wants to be in Chad (Billy Flynn) and Thomas’ lives, but she just won’t think it’s a good idea. She’ll maintain that Chad is moving on and it’s for the best. Jennifer will continue to stay tight-lipped, but she’ll hope to shift her daughter’s perspective soon.

Elsewhere, Gabi (Camila Banus) and Chad (Billy Flynn) will share a steamy kiss. They’re growing closer and that could cause major issues. Speaking of issues, Blanca (Ximena Dque) has some. She’s not on board with Dario’s (Jordi Vilasuso) macho act and dangerous behavior.

Blanca will give Dario updates on her decision to hit the road. The news will certainly catch Dario by surprise. Monday will mark Ximena Duque’s last airdate on the NBC soap. Goodbye, Blanca! We hardly knew ye. Stick with DOOL and don’t forget to check CDL often for the latest Days of Our Lives spoilers, updates and news.