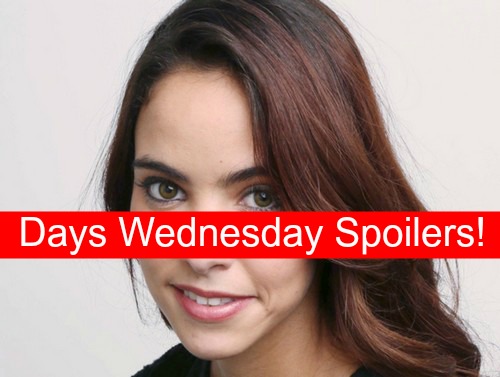 “Days of Our Lives” spoilers for Wednesday, February 17, tease that Chad (Billy Flynn) will grill Andre (Thaao Penghlis) about what he did to Stefano (Joseph Mascolo). Thanks to Rafe (Galen Gering) and Hope (Kristian Alfonso), Andre could be headed to prison. Rafe just found the murder weapon in Andre’s suitcase and now he’ll have to answer some tough questions.

Chad will wonder if Andre killed Stefano and tried to pin it on Hope. DOOL spoilers reveal that Andre will insist he’s innocent. He’ll beg Chad to believe his story. Of course, Chad doesn’t trust Andre at all and he’ll have a hard time buying anything he says.

Next week on “Days,” the cops will make an arrest. Will Andre find a way out of this jam? We’ll have to wait and see, but it’s clear that Rafe and Hope aren’t going to make it easy for him.

Across town, we could see a horrific crime unfold. “Days of Our Lives” has been keeping the details hush-hush, but several sources claim Chase (Jonathon McClendon) will rape Ciara (Vivian Jovanni). Since the show only released three official spoilers for the episode instead of the usual four, it sounds like Wednesday is the day that will change everything for these teens. This storyline should be difficult to watch.

Elsewhere, Ava (Tamara Braun) will prepare to destroy Steve (Stephen Nichols) and Kayla’s (Mary Beth Evans) relationship. DOOL spoilers indicate that Ava will return to Salem with a raunchy sex video. She won’t drop this bomb on Kayla just yet, but it’s definitely coming. When Kayla gets updates on Steve and Ava’s rendezvous, things are going to get ugly.

In the meantime, Steve will try his best to keep Kayla from learning about his sex session with the woman they both hate. It appears Kayla won’t hold a grudge for too long once the truth comes out. After all, Steve only slept with Ava to save Kayla’s life.

Besides, “Days of Our Lives” spoilers say they’ll have much bigger problems to worry about soon. Ava’s final blow is going to be a doozy. Steve and Kayla will start to panic when they realize what Ava’s trying to do. Kayla could face murder charges by the end of all this. Stay tuned to see if Ava will manage to pull off the last phase of her scheme.

So “Days” fans, what do you think about the news that Chad will suspect Andre killed Stefano? Will Ciara be able to cope with what Chase is about to do? Will Ava eventually get what she has coming? Voice your opinion in the comments below and don’t forget to check CDL often for the latest “Days of Our Lives” spoilers, updates and news.