‘Days of Our Lives’ Spoilers: Ciara Declares Love for Chad, Hopes for Romance – Chad Rejects Her, Only Wants Abigail 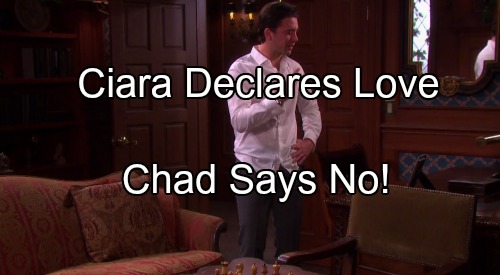 Days of Our Lives (DOOL) spoilers tease that Ciara (Vivian Jovanni) will make a bold move. She’s been pining for Chad (Billy Flynn) over the past few months, but she hasn’t gathered up the nerve to say anything yet. Ciara will finally decide that she can’t contain her feelings any longer. She’s in love with Chad – or at least she thinks she is.

In reality, this is probably the typical puppy love that most teenagers experience. Ciara doesn’t really know Chad that well. She just has this idea in her head that he’s the perfect guy. Part of this may stem from being raped by Chase (Jonathon McClendon). Ciara naturally has some issues to work through.

Ciara claims that she likes Chad’s unpredictable nature, but what’s so unpredictable about a single father who sits at home longing for his missing wife? Chad is far from the dangerous rebel Ciara makes him out to be. Perhaps Ciara is kidding herself about craving risk in a relationship.

After everything that’s happened to her, maybe Ciara was subconsciously drawn to someone who isn’t truly available. Deep down, Ciara must realize that Abigail (Kate Mansi) is the love of Chad’s life. There’s just no room in Chad’s heart for anyone else.

Meanwhile, we’ve watched Theo (Kyler Pettis) express plenty of interest in Ciara. He tried to be patient and kind, but he still might’ve been a little too close for comfort. Ciara could’ve been attracted to Chad because he remained distant and there was no pressure.

Of course, that’s because Chad has never thought of Ciara as anything more than a friend and nanny. We’re sensing some abrupt shifts in this Days of Our Lives storyline. That might be due to the writing shakeups behind the scenes. DOOL may be heading in a new direction.

Days viewers will recall that Ciara recently moved out of the DiMera mansion. It seems like they’re pulling Ciara away from Chad instead of pushing them together. Nevertheless, Ciara will determine that Chad needs to know how she feels. She’ll want their mild friendship to become a serious romance.

Days of Our Lives spoilers say Ciara will profess her love, but she won’t get the outcome she was wishing for. The news of Abigail’s death has sent Chad on a downward spiral. He can’t be bothered by Ciara’s insignificant crush. Chad will insist that he has no intention of pursuing a relationship with Ciara.

There’s always a chance that things will change later, but let’s hope they stay on this improved path. A Chad and Ciara pairing would be a disaster. Many fans would view it as highly inappropriate.

It appears DOOL might be nudging Ciara back to the teen group where she belongs. Days spoilers hint that Ciara is about to enter a love triangle with Theo and Claire (Olivia Rose Keegan). We’ll give you updates as this plot unfolds. Stay tuned and don’t forget to check CDL often for the latest Days of Our Lives spoilers, updates and news.