Days of Our Lives Spoilers: Clyde Breaks Out of Prison with Xander and Orpheus – Crashers Destroy Brady and Theresa’s Wedding

Days of Our Lives (DOOL) spoilers tease that a prison break storyline is coming up. This is exactly what the NBC soap needs right now. Everyone has been hoping for something exciting to draw us back in after the Olympics and we’re certainly going to get it.

DOOL spoilers indicate that Clyde (James Read) has been plotting in his cell. He isn’t the kind of man you can keep behind bars for very long. It appears Clyde has even made a few friends in the slammer. He’s assembling a crew for an epic escape plot.

One of Clyde’s partners will be Orpheus (George Del Hoyo), a DOOL villain whose heyday came in the ‘80s. If you haven’t heard of him, don’t worry. You can expect Days to provide a refresher on the havoc Orpheus wreaked. Needless to say, this guy is bad news.

We’ll hear Orpheus explain why he wants to get revenge and they’ll likely throw some flashbacks as well. Of course, there’s another important player in this escape scheme. Clyde will introduce Xander (Paul Telfer) to Orpheus and convince him that they need his help.

After they have a solid strategy, the team will put their plan into action. Days of Our Lives spoilers reveal that Clyde, Orpheus and Xander will blow this joint. That’s when the fun will really begin – at least for them. 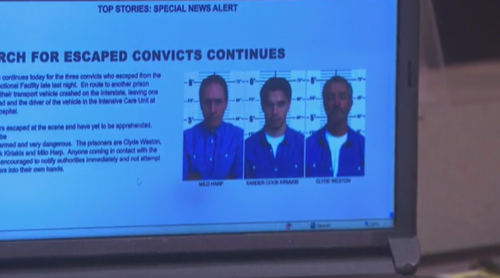 Theresa (Jen Lilley) will don her bridal gown and prepare to say “I do.” She’ll have Tate back by then, which means she’ll be on cloud nine. Unfortunately, Xander’s arrival will put a damper on Theresa’s big day. Days fans will remember that Theresa falsely accused Xander of rape and he was locked up immediately.

The Salem PD was probably looking for anything they could use to put Xander in prison. He’d already gotten away with trying to kill Nicole (Arianne Zucker) and Eric (Greg Vaughan). Nevertheless, Xander will insist that he wants Theresa to die for putting him behind bars.

While Theresa faces Xander’s wrath, Kate (Lauren Koslow) will also get what she has coming. With a gun in his hand, Clyde will inform Kate that she’s a dead woman if she moves. It seems Clyde didn’t like the fact that he was dumped and humiliated.

It’s kind of odd that Clyde isn’t going after JJ (Casey Moss) or Aiden (Daniel Cosgrove). They actually played roles in sending Clyde to jail. Who knows? Maybe there’ll be a whole revenge tour! Pass the popcorn because this sounds like good stuff.

Finally, Orpheus will have his turn to cause total mayhem. Eve (Kassie DePaiva) will return to watch Brady and Theresa tie the knot, but she’ll end up with a gun to her head instead. Orpheus will eventually decide that all of the guests should die.

You shouldn’t be too concerned though. Days of Our Lives isn’t Game of Thrones. There will be no red wedding in Salem. However, that doesn’t mean we won’t see some shots fired. We’ll give you updates as more details emerge. Stay tuned and don’t forget to check CDL often for the latest Days of Our Lives spoilers, updates and news.