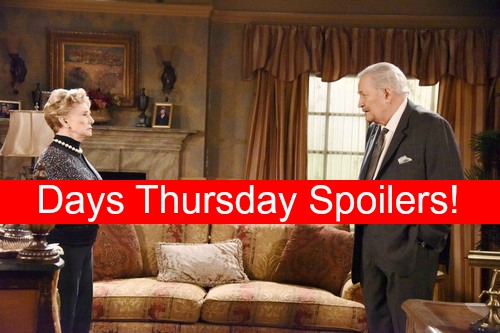 “Days of Our Lives” spoilers for Thursday, January 14, tease that Brady (Eric Martsolf) will have a strange dream about Nicole (Arianna Zucker). This is the beginning of a new path for Brady. Now that he has Daniel’s (Shawn Christian) heart, Brady will start to feel the influence of his pal.

DOOL fans can expect some shifts for Brady as he experiences Daniel’s emotions and impulses.

In the meantime, Brady will drop by Eric’s (Greg Vaughan) room to hash things out. Brady will probably be disappointed in Eric’s actions, but he’ll also know that wallowing in guilt won’t make any of this better.

What’s done is done and now Eric needs to look to the future. “Days of Our Lives” spoilers say Brady will insist that Eric needs to live a life that honors Daniel. Eric will ultimately have to move forward in spite of his shame.

Elsewhere, Andre (Thaao Penghlis) will deduce that Hope (Kristian Alfonso) must’ve had something to do with Stefano’s (Joseph Mascolo) disappearance. It won’t be long until Andre connects the dots and figures out that Hope has killed his beloved father. Once that happens, you can bet that Andre won’t rest until he gets retribution.

“Days” viewers know that DiMeras always seek vengeance. Rafe (Galen Gering) will do his best to keep Hope’s crime under wraps, but it’s going to be tough with Andre lurking around. Andre doesn’t particularly like dealing with the police, but he may make an exception if it means bringing Hope down. Otherwise, we could see Andre take the vigilante justice route.

Meanwhile, DOOL spoilers indicate that Caroline (Peggy McCay) will have another startling vision about Victor (John Aniston). However, this time Victor will have an odd reaction to Caroline’s news. Could we see some foreshadowing about Deimos’ (Vincent Irizarry) impending arrival?

Deimos will show up in Salem on January 18 and he’ll bring a major vendetta with him. Stick with “Days of Our Lives” for updates on Deimos’ revenge plot.

So “Days” fans, what do you think about Brady’s bizarre dream? Will Eric listen to Brady’s advice? Can Andre crack the case? Will Victor be concerned about Caroline’s vision? Let us know what you think in the comments below and don’t forget to check CDL often for the latest “Days of Our Lives” spoilers, updates and news.