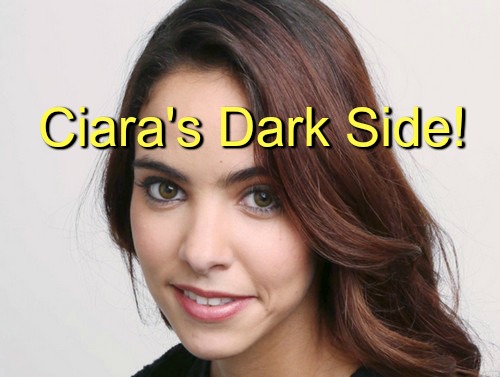 “Days of Our Lives” (DOOL) spoilers reveal that Ciara (Vivian Jovanni) will attempt to forget about what she’s endured. Ciara loved Chase (Jonathon McClendon) like a brother and she never thought he’d be capable of rape. Nevertheless, Chase betrayed her trust and now Ciara is suffering greatly.

Chase has been taken to jail and is being charged with sexual assault, but Days of Our Lives spoilers predict that the cost for Ciara will be much higher. Ciara will have to deal with the emotional damage for years.

There’s no way Ciara can just put this behind her like nothing happened, but that won’t stop her from trying. DOOL spoilers indicate that Ciara will throw a big birthday bash in an effort to have some fun and focus on her future.

Unfortunately, the party will only provide a brief break. Ciara’s torment will soon return. Hope (Kristian Alfonso) is worried about her daughter and she’ll grow increasingly concerned as the weeks go by. “Days of Our Lives” spoilers suggest that Ciara’s character will begin to shift. She’s been through plenty of heartbreak over the past few months.

“Days” fans know that Aiden (Daniel Cosgrove) nearly murdered Hope on her wedding night episode. Bo (Peter Reckell) suddenly popped up, killed Aiden in self-defense and died from a brain tumor a short time later. That’s a lot of family drama. Then, Ciara was kidnapped, her home was set on fire and now she’s been raped. How much can one young woman take?!

Those traumatic experiences will start to take a toll. It’s not surprising that we’re going to see darker shades of Ciara. DOOL viewers can expect Ciara to struggle, but she’ll have a little help. Hope will obviously support Ciara through this. Theo (Kyler Pettis) will also remain a staunch friend and their bond could turn into something more.

Maybe Julie (Susan Seaforth Hayes) could speak to Ciara as well. She’s a rape victim and she might be able to offer guidance on how to move forward. Of course, Marlena (Deidre Hall) will supply the professional counseling that Ciara needs.

Let’s hope Ciara will realize that she can overcome all these difficulties. Stick with “Days of Our Lives” for updates on what lies ahead for Ciara.

So “Days” fans, what do you think about the news that Ciara will throw a huge birthday shindig? Will Ciara put her despair on pause? Will Ciara’s family and friends help her cope in the coming months?