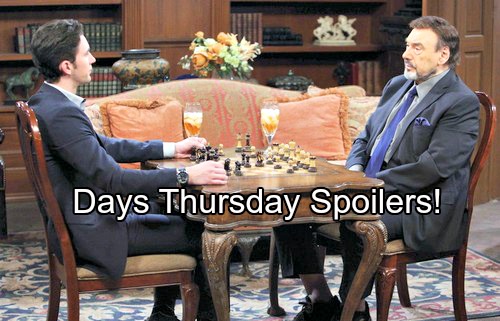 Days of Our Lives (DOOL) spoilers for Thursday, August 4, tease that Nicole (Arianne Zucker) just won’t be able to resist Deimos (Vincent Irizarry). She’s been trying to convince herself that Deimos isn’t the guy for her, but her plan obviously isn’t working out. Nicole ended up back at the Kiriakis mansion and admitted that she couldn’t get Deimos out of her head.

That confession will be music to Deimos’ ears. He’ll urge Nicole to stop fighting their connection. Days of Our Lives spoilers indicate that Nicole and Deimos will share some passionate moments. After they make love, Deimos will pop the question.

Nicole will think everything is moving too fast, but Deimos will insist that it feels right. He’ll believe there’s no point in waiting when their feelings are so strong. Deimos spent 30 years stuck in prison. Now that he’s out, Deimos is trying to make up for lost time. He’s not the type of person who just sits around and lets life pass him by. Those days are long gone.

When Deimos mentions having children with Nicole, she’ll break down in tears. Deimos will undoubtedly wonder what he did wrong when Nicole rushes out. DOOL viewers know that Nicole has struggled with fertility issues. She miraculously managed to conceive two babies, but she lost them both. Nicole believes motherhood just isn’t in her future.

Days spoilers reveal that Nicole will run into Chloe (Nadia Bjorlin) and share the news of Deimos’ proposal. Chloe will be just as stunned as Nicole. She’ll warn her friend to proceed with caution. Chloe won’t want Nicole to get tangled up with a man she can’t truly trust.

Of course, Chloe also happens to be pregnant with Deimos’ child. She’ll likely keep that a secret from both Nicole and Deimos for the time being. Days spoilers suggest that the baby drama will really heat up down the road. We’re going to see some shocking developments along the way.

In the meantime, Chad (Billy Flynn) will feel like his world is crumbling. Jennifer (Melissa Reeves) is trying to take Thomas away from Chad and he just can’t seem to talk her out of it. Days of Our Lives spoilers say Chad will think about Stefano (Joseph Mascolo) as he tries to cope. He’ll need to summon some of that DiMera strength if he hopes to deal with what’s coming next.

Chad will soon get some devastating updates on Abigail (Kate Mansi). He’ll lose control as he realizes his wife is dead. Fortunately, we know that Chad will be misinformed. Marci Miller will make her first appearance as Abigail this fall and we’re hearing great things about her portrayal. Billy Flynn has been praising his new costar in various interviews.

There’s sure to be an adjustment period, but it sounds like DOOL fans are going to enjoy Miller’s spin on the character. We can’t wait to see what’s next for “Chabby.” Stay tuned and don’t forget to check CDL often for the latest Days of Our Lives spoilers, updates and news.