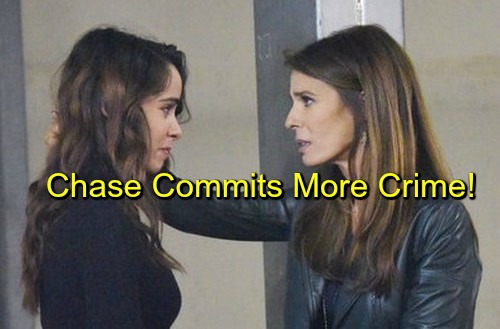 “Days of Our Lives” (DOOL) spoilers reveal that Ciara (Vivian Jovanni) will try to find a way to press through the pain of being raped. Unfortunately, Ciara may not have much luck. The terrible memories of what Chase (Jonathon McClendon) did will continue to haunt Ciara.

DOOL spoilers indicate that Hope (Kristian Alfonso) will do her best to get Ciara the help she needs. However, there’s a good chance Ciara will struggle with this heartache for a while. Chase robbed Ciara of so many things that day. She’ll probably never forgive Chase for sending her down this dark path.

As Ciara works through her issues, “Days” spoilers say Chase will start to get desperate. Hope had Chase arrested and as far as we know, he’s still sitting in jail. Chase doesn’t have any money for bail and Andre (Thaao Penghlis) is locked up, too.

Chase’s aunt didn’t seem very concerned about him either. It’s doubtful that this auntie is going to hand over money for a rapist nephew she barely knows.

“Days of our Lives” spoilers tease that Chase’s anguish will lead to another crime. Will Chase escape from jail and try to hide out somewhere? It’s a possibility.

Then again, maybe someone will come through for Chase after all. He could make bail and try to go on the run. Chase might even rob someone so he’d have available cash.

Regardless, Chase won’t be out of the picture just yet. According to IMDb, Jonathon McClendon will be in at least some of the episodes Aiden (Daniel Cosgrove) is set to appear in.

We still don’t know the first air date of Daniel Cosgrove’s return, but we’ll definitely see Aiden by late May. He might even pop up sooner.

Many DOOL viewers are excited to see how Hope reacts to Aiden’s sudden reappearance. It should be interesting to watch Aiden react to Chase’s actions as well. Of course, that depends on the nature of Aiden’s return.

There’s still a chance Aiden will show up in a fantasy format, but that doesn’t seem too likely. We know that Aiden’s stay in Salem will be lengthy and it would be odd if he spent all of his time as a ghost or in dreams. It sounds like Aiden will be the real deal. Stick with “Days of Our Lives” for updates on Aiden’s revival.

So “Days” fans, what do you think about the news that Ciara will face more difficulties? What will Chase’s next crime be? Are you looking forward to Aiden’s return? Voice your opinion in the comments below and don’t forget to check CDL often for the latest “Days of Our Lives” spoilers, updates and news.