‘Days of Our Lives’ Spoilers: DOOL’s Fall Preview – Revenge Is Sweet, Love Is Complicated and Secrets Lead to Trouble 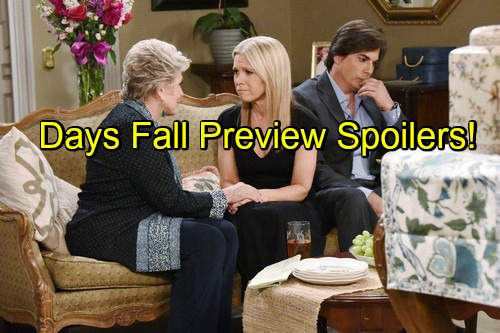 Days of Our Lives (DOOL) spoilers tease that some huge storylines are coming up over the next few months. You may notice some exciting shifts pretty soon. Days went through a writing transition a while back and we’re about to see the effects of that on our screens. Let’s take a look at a fall preview featuring DOOL’s hottest plots.

First, we have the prison break that everyone’s been buzzing about. Clyde (James Read) will team up with Xander (Paul Telfer) and Orpheus (George DelHoyo) to blow this joint. All three of them will have very specific targets in Salem.

Clyde will have a showdown with Kate (Lauren Koslow) and he’ll quickly rattle Aiden’s (Daniel Cosgrove) cage, too. Days viewers will remember that Aiden’s evidence sealed Clyde’s fate. Of course, Clyde won’t forget about getting vengeance for Ben (Robert Scott Wilson). You can expect Chad (Billy Flynn) to have a bit of a scare involving Thomas.

Orpheus will have his heart set on taking down John (Drake Hogestyn), Marlena (Deidre Hall), Steve (Stephen Nichols) and Kayla (Mary Beth Evans). He won’t mind if anyone connected to them gets caught in the crossfire. Orpheus wants to cause as much pain as possible during his revenge tour.

Meanwhile, Xander will threaten Theresa’s (Jen Lilley) life as she prepares to tie the knot. In addition, Xander will have some unfinished business with Nicole (Arianne Zucker). Speaking of business, Dario (Jordi Vilasuso) and Eduardo (A Martinez) will start a new corporation. They could hit a roadblock thanks to the Kiriakis and DiMera war that’s brewing.

Other Days of Our Lives spoilers say Chad will reach out to Kate as he tries to repair any damage that’s been done to his family’s empire. Chad will hope to build it back up so Thomas will have a real legacy. He’ll do his best to get his act together and be the dad that Thomas needs.

We can also look forward to Marci Miller’s debut as Abigail, which is reportedly set for November. As we inch closer to Abby’s return, some shocking news will emerge. Laura (Jaime Lyn Bauer) will play a role in this development, but JJ (Casey Moss) could be a bigger player. He’ll go on a mission for answers and he’ll come home with a stunning secret.

If JJ finds out Abigail is alive and keeps it from Chad, it’s not going to end well. Gabi (Camila Banus) certainly won’t approve of whatever her boyfriend is hiding. Their relationship won’t be the only one that’s plagued with problems. As Adrienne (Judi Evans) and Lucas (Bryan Dattilo) prepare for their nuptials, Justin (Wally Kurth) will wonder if he’s made a terrible mistake.

Elsewhere, Days of Our Lives spoilers state that Abe (James Reynolds) will run into a familiar face. Dr. Valerie Grant will show up and Abe will be drawn to his former flame. Unfortunately, a strange fib will leave Theo (Kyler Pettis) asking what this doc’s deal is. It sounds like there could be some drama once the truth comes out.

All of that is coming this fall on the NBC soap. We’ll give you updates as more details emerge. Stay tuned to DOOL and don’t forget to check CDL often for the latest Days of Our Lives spoilers, updates and news.