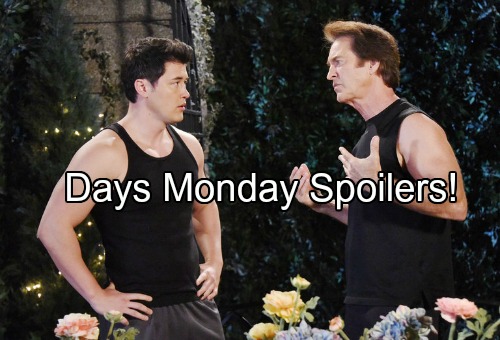 Days of Our Lives (DOOL) spoilers for Monday, September 19, tease that Paul (Christopher Sean) and John (Drake Hogestyn) will be on a mission to find the escapees. Xander (Paul Telfer), Clyde (James Read) and Orpheus (George DelHoyo) have been terrorizing their enemies all over town. John and Paul will hope to put a stop to it and lock these fugitives up where they belong.

Of course, that’s not going to be an easy task with this clever bunch. The terrible trio just decided that they’d work better as a team. They want to make life in Salem a total nightmare. DOOL characters won’t know what hit them by the time Orpheus, Xander and Clyde finish their horrifying quest for vengeance.
Days of Our Lives spoilers indicate that this revenge tour will play out over the next couple of months.

The villains want to slowly torture the people the hate. That’s good news for Days fans. We should get plenty of action as this motley crew wreaks more havoc. 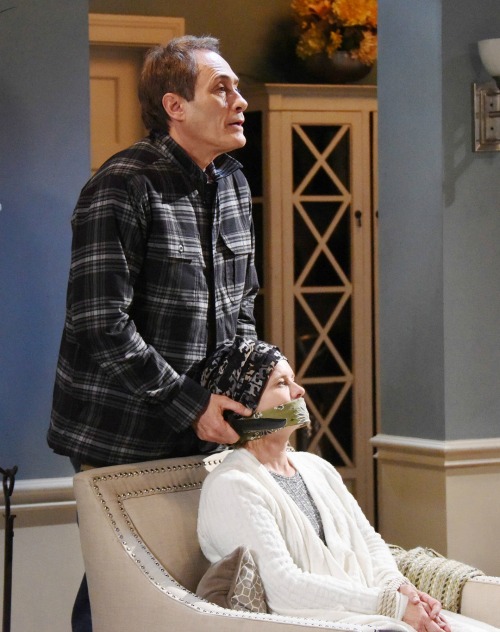 Meanwhile, Eduardo (A Martinez) will deal with some guilt. He posed as a guard on the transport van in an effort to scare a criminal. Eduardo believes that convict has been targeting his family from behind bars. Unfortunately, plans went awry and the van crashed.

Now Eduardo feels responsible for inadvertently causing the current chaos. Days of Our Lives spoilers say Eduardo will admit the truth to John. He’ll explain what happened and offer to help in any way he can.

Things will take an interesting turn when Eduardo makes a shocking discovery. We don’t know for sure what that might be, but his findings will relate to Dario (Jordi Vilasuso). It’s probably safe to assume that this is about the threats.

Dario is actually the one who was “targeting” the Hernandez family. He just wanted to rev up the danger so Eduardo would leave town. Once Eduardo learns his own son was to blame, they’ll have some issues to work through.

Luckily, Days spoilers suggest that they’ll be able to put this incident behind them. It may take a while to sort everything out, but a bond could eventually form. Dario and Eduardo will even start a company together pretty soon. Stay tuned to see if they’ll establish a relationship as they face corporate drama.

Speaking of relationships, Gabi’s (Camila Banus) romance with JJ (Casey Moss) has hit a snag. They disagree about Gabi’s new job and the risks of getting involved with the DiMeras. JJ doesn’t trust Chad (Billy Flynn) or anyone connected to him. Gabi doesn’t feel the same way and it’s causing some strife.

DOOL spoilers reveal that Rafe (Galen Gering) will question Gabi about her troubles. Gabi will open up about her feelings for JJ and the problems they’re tackling. There are undoubtedly other obstacles coming up for this couple.

Will JJ and Gabi’s relationship survive whatever lies ahead? We’ll give you updates as more details emerge. Stay tuned and don’t forget to check CDL often for the latest Days of Our Lives spoilers, updates and news.