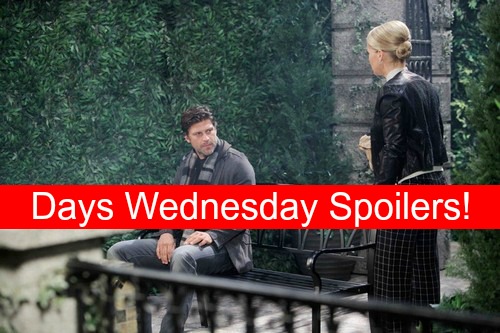 “Days of Our Lives” spoilers for Wednesday, February 3, reveal that Ciara (Vivian Jovanni) and Chase (Jonathon McClendon) will have a war of words. Ciara told Chase she wasn’t angry with him about his bullying anymore, but she’ll still probably want an explanation for why he tormented Theo (Kyler Pettis).

On top of that, Chase had Ciara terrified when he disappeared and sent her texts about never bothering anyone again.

DOOL spoilers say Ciara and Chase will try to talk through their issues, but it’s going to take a lot of work to get back on good terms. Meanwhile, Hope (Kristian Alfonso) will feel like she’s caught in the middle of all this turmoil. Hope was already stressed to the max and this is the last thing she needs at the moment.

Fortunately, Rafe (Galen Gering) will be there to help settle everyone down. He’s been a stabilizing force in Hope’s life lately and it appears that trend will continue in the coming months. Rafe will never stop trying to get Hope out of any jam she finds herself in.

Elsewhere, Eric (Greg Vaughan) will come to Jennifer’s (Melissa Reeves) aid. “Days” viewers know that Jennifer reached out to Eric in an effort to get his drinking problem under control. Now Eric will have a chance to return the favor.

“Days of Our Lives” spoilers tease that Eric will realize something is up with Jennifer. Perhaps Eric will stumble across some of Jen’s empty pill bottles. Eric will naturally be concerned about the road Jennifer is headed down.

He’ll confront Jennifer about her abuse of painkillers. Eric and Jennifer will eventually start to bond as they fight their addictions.

Other DOOL spoilers indicate that Chad (Billy Flynn) will approach Justin (Wally Kurth) and Adrienne (Judi Evans) about a deal. Since Sonny (Freddie Smith) basically handed over his ownership of Club TBD to his parents, this deal likely pertains to Chad’s part in it.

Maybe Chad is hoping Adrienne and Justin will buy him out so he has enough money to keep the DiMera mansion from foreclosing.

Then again, Chad might want to own the whole thing so he can keep a steady stream of money coming in. Bottom line, Chad is trying to do whatever he can to solidify his plans for the future with Abigail (Kate Mansi). Stick with “Days of Our Lives” for updates on how Justin and Adrienne will react to Chad’s proposal.

So “Days” fans, what do you think about the news that Rafe will try to help Hope handle her latest crisis? Will Chase and Ciara make peace? Will Eric be able to get through to Jennifer? Can Chad lock down his future with Abigail?