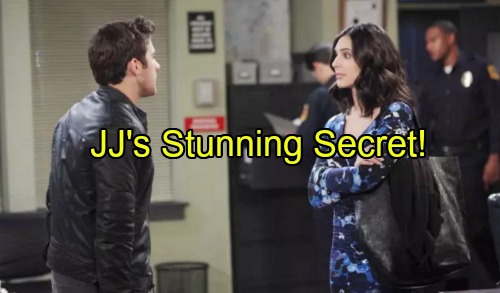 Days of Our Lives (DOOL) spoilers tease that Gabi (Camila Banus) will finally relax when JJ’s (Casey Moss) condition improves. He’ll officially be on the road to recovery. When JJ was knocking on death’s door, Gabi felt guilty for not appreciating him like she should’ve. Her remorse overwhelmed her.

Gabi promised she’d never take JJ for granted again and she intends to keep her word. Days spoilers suggest that Gabi will apologize to JJ and hope that they can move forward. She’ll feel like they need to take advantage of the second chance they were given. This is their shot at a clean slate.

Gabi has been growing closer to Chad (Billy Flynn) lately, but they haven’t crossed any lines. They’re sticking to friendship for now. Still, Gabi must feel like she let JJ down by letting their love fade.

Of course, Gabi probably isn’t the one who should feel guilty. When JJ was coming out of his coma, Jennifer (Melissa Reeves) heard him mumbling in his sleep. He kept telling Gabi that he was so sorry. Days of Our Lives hint that JJ’s secret may continue to haunt him.

What has JJ been hiding? Many DOOL viewers have wondered if JJ knows more than he’s letting on about Abigail (Kate Mansi). However, the fact that JJ only murmured an apology to Gabi seems significant.

As far as we know, Jennifer believes Abigail is dead. Wouldn’t JJ have been mumbling an apology to his mom, too? Perhaps Andre (Thaao Penghlis) and Laura (Jaime Lyn Bauer) are the only people who know Abigail is still alive. JJ may not be in the loop after all.

If JJ’s secret isn’t about Abigail, what is it about? Could JJ have met another woman when he was down in Miami? He claimed he was busy searching for info on Abby and that’s why he didn’t call or text. Maybe JJ was busy cheating instead.

If that’s the case, JJ could’ve hooked up with someone random as a plot point. That’s what happened when Will (Guy Wilson) went to Los Angeles. Then again, we might know the person this time around.

Could it have been Lani (Sal Stowers)? Her location hasn’t really been explained. When Lani was written off, she simply disappeared. Theo (Kyler Pettis) called Lani after Abe (James Reynolds) got shot, but we still didn’t get any concrete answers.

It’s worth mentioning that Lani first transferred to Salem from Miami. We should also point out that Lani is returning to Days soon. She’ll likely be back to reconnect with her family, but the JJ story could be a fun side item.

Lani and JJ worked together to bring down Ben (Robert Scott Wilson), so there’s a hint of history there. They at least know each other and hooking up would be within the realm of possibilities. It might be interesting to see the consequences of a brief romance.

No matter what JJ is hiding, he’ll have to come clean eventually. Gabi will be angry about her beau’s secret, but she’ll get over it before long. Days of Our Lives spoilers state that Gabi and JJ will work through the crisis ahead.

It sounds like some great drama is coming up. We’ll give you updates as more news comes in. Stay tuned to DOOL and don’t forget to check CDL often for the latest Days of Our Lives spoilers, updates and news.