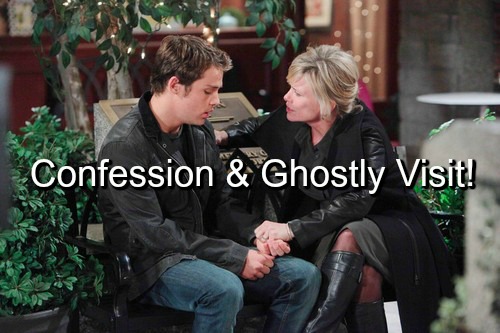 “Days of Our Lives” spoilers for this weeks episode on Tuesday, March 1, tease that Kayla (Mary Beth Evans) will be shocked once Joey (James Lastovic) comes clean about what actually happened to Ava (Tamara Braun). When Joey seems edgy about the whole ordeal, Kayla will push him to open up. Joey will admit that he killed Ava and now Steve (Stephen Nichols) is taking the fall.

Days of Our Lives spoilers say Kayla will promise Joey that Steve will protect him. Both Steve and Kayla love their son more than anything. They don’t want to see Joey head to the slammer. DOOL spoilers say Steve will give Roman (Josh Taylor) a full confession to make sure that doesn’t happen. Of course, Roman will be suspicious of Steve’s story. The facts just don’t add up. Roman will want Steve to tell him what really went down that night.

There’s a good chance the bloody pillow will come up at some point. The cut from Joey’s hand left his DNA behind. “Days of Our Lives” fans also saw Joey’s bandage fall off in Ava’s room. There’s definitely evidence against Joey, but Steve will insist that his son isn’t to blame.

Roman is already allowing Hope (Kristian Alfonso) and Rafe (Galen Gering) to hide the truth about Stefano’s (Joseph Mascolo) murder. He might as well let Steve hide the truth about Ava’s murder, too. “Days” viewers will be anxious to see how Steve gets out of his current jam.

Meanwhile, Days spoilers predict that Chad (Billy Flynn) will be stunned when Stefano appears to him in a vision. Since Chad has been struggling with his grief, this should help him get closure. There are so many things Chad wants to tell his father. Chad won’t take this opportunity for granted.

DOOL spoilers indicate that all of Chad’s emotions will come pouring out during this heart-to-heart chat. By the end of their conversation, Chad should feel better about letting Stefano go. Unfortunately, another problem is about to emerge. This one could put Abigail (Kate Mansi) and Thomas in danger.

Ben (Robert Scott Wilson) will soon be back in a big way. JJ (Casey Moss) will deliver unsettling news about the crazed killer later this week. Stick with “Days of Our Lives” to watch Chad get updates on Ben’s escape from the psychiatric hospital.

So “Days” fans, what do you think about Joey’s shocking admission to Kayla? Will Roman see right through Steve’s lies? Will Chad be able to accept his loss and move on? Will Ben’s escape shake Chad to the core? Voice your opinion in the comments below and don’t forget to check CDL often for the latest “Days of Our Lives” spoilers, updates and news.