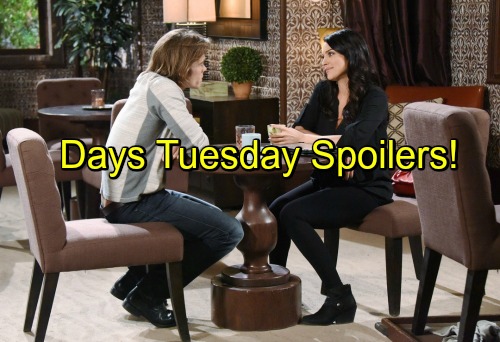 Days of Our Lives (DOOL) spoilers for Tuesday, August 30, tease that Maggie (Suzanne Rogers) will welcome Victor (John Aniston) home after he’s released on bail. Victor will be happy to see that Maggie’s recovery is on track. The surgery worked and Maggie should be walking before long. However, a dark cloud will hang over Victor and Maggie’s celebration.

Victor has been blamed for Tate’s kidnapping and the charges are dividing the Kiriakis family. Caroline’s (Peggy McCay) vision seemed to indicate that Victor was involved, but maybe her glimpse was slightly misleading. There may be another explanation that will leave Victor looking a little less guilty.

Days of Our Lives spoilers say Victor will vow to prove he isn’t responsible for the crime. Deimos (Vincent Irizarry) has faced some suspicion, but he claims he’s innocent as well. Victor isn’t a big fan of his brother, but he may have to put his negative feelings aside. If Victor wants to get off the hook, he’ll need Deimos’ help.

In the meantime, Philip (John-Paul Lavoisier) will provide some assistance of his own. Chloe (Nadia Bjorlin) is stuck in a huge mess, but Philip is attempting to dig her out of it. DOOL spoilers state that Chloe will work with Philip to concoct a believable baby tale. They need to make sure they get their story straight so they can start spreading the news.

Aiden won’t offer any details about his shady actions. He’ll insist that this is his position now and everyone will just have to learn to live with it. Hope will contend that she certainly doesn’t have to. Days of Our Lives spoilers reveal that Hope will be ready to turn in her badge and gun. She’ll suggest that she’d rather not work at all if it means working with Aiden.

Later, Roman (Josh Taylor) and Rafe (Galen Gering) will manage to talk Hope off the ledge. They’ll maintain that quitting won’t make things any easier. Hope needs to play by Aiden’s rules or else he could take her down for Stefano’s (Joseph Mascolo) murder. Unfortunately, it looks like the rulebook will eventually get tossed out and Hope will indeed pay the price.

Other Days spoilers say Kate’s (Lauren Koslow) bold move will lead to some surprises. She needs somewhere to live and perhaps a place to conduct her business. As a result, Kate will decide to buy the Martin house from Julie (Susan Seaforth Hayes) and Doug (Bill Hayes). She’ll immediately force all of the guests to leave. Kate has no intention of letting this remain a B&B.

It appears Kate is going to be a busy gal over the next few months. DOOL viewers can expect Kate’s partnership with Andre (Thaao Penghlis) to deepen. She’ll find time to help Chad (Billy Flynn) out with DiMera Enterprises, too.

Will Kate stir up more trouble soon? We’ll keep you posted as additional info emerges. Stay tuned and don’t forget to check CDL often for the latest Days of Our Lives spoilers, updates and news.