Days of Our Lives (DOOL) Spoilers: Hope Learns She Killed Stefano For Nothing – Steve Cleans Up Joey’s Murderous Mess 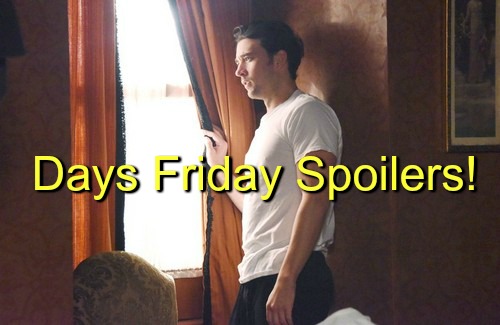 “Days of Our Lives” spoilers for the Friday, February 26, episode tease that Joey (James Lastovic) will find himself in big trouble. After getting drunk at the party, Joey returned home and got updates on Ava’s (Tamara Braun) latest scheme. That was the last straw for Joey. Steve (Stephen Nichols) and Kayla (Mary Beth Evans) have been tormented enough.

Joey decided there was only one way to be sure Ava would be out of their lives forever. On Friday’s episode of DOOL, Steve will arrive at the hospital to find Joey smothering Ava with pillow.

Unfortunately, Steve won’t get there in time to stop Joey from becoming a murderer. As a result, Steve will tell Joey to go back to the house and let him take care of this.

Steve will take the blame for Joey, but there’ll be a problem. Remember when Joey broke a beer bottle at the rave and cut his hand? That’s going to be important. Joey’s blood will be found on the pillow he used to suffocate Ava. Roman (Josh Taylor) will naturally be suspicious, but Steve will try to explain. He’ll insist that Joey showed up while the crime was being committed.

Roman might suspect that the story is bogus, but Steve will be adamant that he’s going to take the fall for his son. Joey is in quite a jam and Steve will soon be in one, too. Luckily, “Days of Our Lives” spoilers say someone will secretly be on Steve’s side. He or she will try to pull some strings and get Steve off the hook.

Meanwhile, Chad (Billy Flynn) will get stunning news. It sounds like Rafe (Galen Gering) may fill Chad in on the evidence against Andre (Thaao Penghlis) as well as his recent arrest. Chad will be forced to face the facts. Stefano’s (Joseph Mascolo) body has been identified.

He’s truly dead and Chad will believe his brother is responsible. “Days” viewers will be anxious to see how Chad reacts when he’s presented with proof.

Hope (Kristian Alfonso) and Rafe’s plan is working out, but a shocking curveball will be thrown their way. “Days of Our Lives” spoilers indicate that Hope will receive an anonymous phone call that really shakes things up.

There’s a good chance someone will inform Hope that she killed the wrong guy.

Will Hope figure out who actually kidnapped Bo (Peter Reckell)? DOOL buzz suggests that Deimos (Vincent Irizarry) is the person Hope should’ve been after. Stick with the NBC soap to see if Hope and Rafe can sort all of this out.

So “Days” fans, what do you think about Steve’s attempt to cover for Joey? Will Chad be distraught when he hears Rafe’s news? Will Hope realize she was mistaken about Stefano? Voice your opinion in the comments below and don’t forget to check CDL often for the latest “Days of Our Lives” spoilers, updates and news.