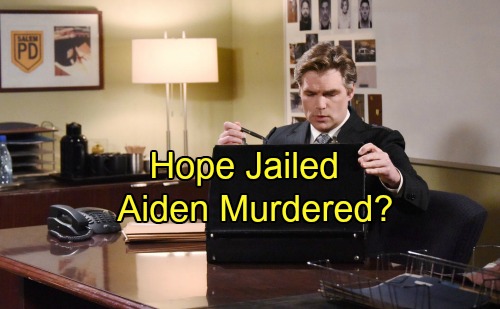 Days of Our Lives (DOOL) spoilers tease that Aiden (Daniel Cosgrove) has big plans. He just arranged for Chase (Jonathon McClendon) to be transferred to a facility in Portland. Aiden assured his son that he’d be moving nearby in a month or so. In fact, Aiden suggested that Hope (Kristian Alfonso) would be coming as well.

Chase was understandably confused by Aiden’s optimism. Hope hates Aiden’s guts after everything he’s put her through. Aiden told Chase not to worry about that. He even hinted that Ciara (Vivian Jovanni) might move out to Portland, too. Aiden believes they can all be a real family again.

There’s no way Hope will be on board with Aiden’s vision for their future. That’s why he’s not going to give Hope a choice. Days of Our Lives spoilers reveal that a blackmail plot is brewing. Aiden might as well add this to his list of offenses. It’s doubtful that Aiden could ever be redeemed at this point.

Days spoilers indicate that Aiden will try to build on the evidence he’s already gathered. He recently has someone trace a crucial phone call in Stefano’s (Joseph Mascolo) murder case. Aiden learned the call originated in Hope’s neighborhood. He also recalls Andre’s (Thaao Penghlis) claim that Hope was his father’s killer.

The pieces are starting to come together, but Aiden probably needs a little more to make anything stick. It appears Aiden will manage to get a recording of Hope discussing her murderous actions. He’ll eventually confront Hope with the proof and urge her to admit it to his face.

Days of Our Lives spoilers state that Hope will feel like she’s trapped. She may be forced to play along with Aiden’s plan for a while, but it won’t last. Hope obviously isn’t going to live the rest of her life with lying Aiden and his rapist son. She’d go to jail before she’d do that.

Actually, a stint in the slammer may be imminent. Days spoilers say a trial will occur this November and strong buzz hints that Hope will be the defendant. In addition, we know that DOOL intends on fully exploring the consequences of Stefano’s death soon. Everything seems to fit.

What does that mean for Aiden? There’s nothing left for him in Salem with Hope stuck in prison. It hasn’t been confirmed, but we can pretty much assume that Daniel Cosgrove has finished taping. If Hope doesn’t play by Aiden’s rules, he could turn her over to the cops and leave town.

However, Aiden will undoubtedly enrage a lot of people if that happens. Hope is one of the most beloved Salemites. There will be plenty of characters out for blood. One of them could easily order someone to pump a bullet in Aiden’s chest.

Of course, there’s always a chance that Clyde (James Read) will take Aiden out before anyone else does. Clyde wants revenge since Aiden’s evidence put him behind bars. If Aiden doesn’t get the opportunity to seal Hope’s fate, he might leave a trail that’s impossible for the Salem PD to ignore. It may be out of Roman’s (Josh Taylor) hands.

Regardless, it sounds like Hope could be a prisoner and Aiden could be a goner! We’ll give you updates as more news comes in. Stay tuned to DOOL and don’t forget to check CDL often for the latest Days of Our Lives spoilers, updates and news.