‘Days of Our Lives’ Spoilers: Jen Lilley Hints at DOOL Return – Theresa Coming Back to Salem? 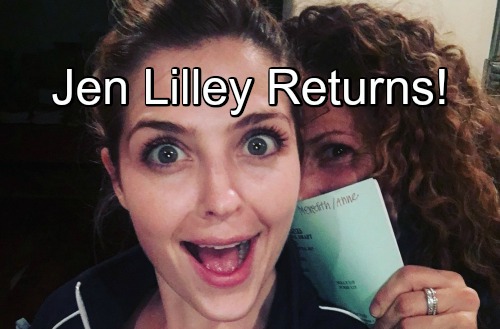 Days of Our Lives (DOOL) spoilers tease that a familiar face may be headed back to the NBC soap. You’ve probably heard by now that Jen Lilley (Theresa) already taped her final scenes at Days, but maybe they weren’t so final after all! A recent tweet reveals that Lilley got together with Meredith Scott Lynn (Anne) to run some lines.

Of course, it’s possible that Lilley was just helping Lynn prepare for her scenes. However, it appears Lilley has an entire script of her own in the picture. Lilley would probably only have a few copied pages if this was just about helping Scott prep her own material.

Lilley seems to be going for a surprised look in the pic as well. Even the caption might provide a hint. Lilley said, “Running lines with @MeredithSLynn! What?! #days #anneresa #coffee #latenight #shenanigans ;).”

Does all of that add up to a Days of Our Lives return? When Lilley left, she noted that the schedule had become too demanding for her at DOOL. She wanted a break to pursue other opportunities. Fortunately, Lilley noted that the door would be open if she wanted to come back.

If Lilley still isn’t ready for a front-burner commitment, this might just be a quick visit to Salem. Many Days of Our Lives fans would love to see Lilley back for at least an episode or two after her initial departure. There’s a chance Lilley could be around for a longer stint though. Nothing has been confirmed yet, but the speculation is exciting.

Before we get to this potential return, we should see Theresa’s goodbye shows around November or December. We know that some scenes were taped at St. Luke’s around the same time as Theresa was wrapping up her run. We’ve also heard that Theresa’s exit storyline is a real tearjerker.

Those clues had some viewers wondering if a funeral might be looming. If Theresa is back, that might blow the death theory. We’ve seen some characters return as ghosts, but that’s usually for poignant scenes rather than fun stuff with a bestie.

Besides, it makes sense to keep a character like Theresa alive. Joseph Mascolo was retiring, so Stefano deserved a good sendoff. Peter Reckell wanted to give Bo fans closure and take his character off canvas permanently. A death made sense there, too.

Jen Lilley, on the other hand, seemed to be suffering from burnout. There’s no reason to kill a young, vibrant character when the actress might want to return someday. If Lilley’s tweet is any indication, Days may have just let Theresa leave town.

If so, that leads to more questions. Perhaps there will indeed be a death, but not Theresa’s. Could Tate be killed off? After all, Theresa wouldn’t just leave her son behind. She wouldn’t take him from Brady either. If Theresa isn’t dying, killing Tate might be the only other option.

It’s possible that Tate will get sick and pass away. If not, there might be some sort of presumed death situation. Whatever the case, DOOL has killed off children in the past. It’s not pleasant, but they just might go there again.

It sounds like some heartbreaking material might be coming up. We’ll give you updates as more news emerges. Stay tuned and don’t forget to check CDL often for the latest Days of Our Lives spoilers, updates and news.