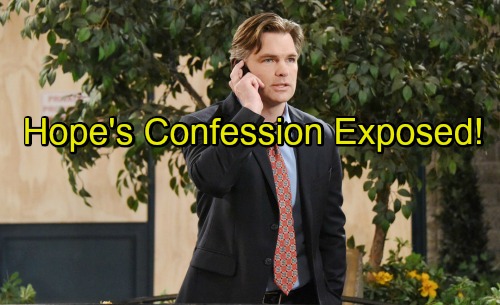 Days of Our Lives (DOOL) spoilers tease that Hope (Kristian Alfonso) will feel like her life is falling apart. After Hope killed Stefano (Joseph Mascolo), her world was changed forever. She’s been living in constant fear that this secret would get out. Hope has had a few moments of peace along the way, but her worries never really left her.

Hope tried to play the only card she had left when Aiden (Daniel Cosgrove) began making his demands. She suggested that she would expose the truth about his first wife’s death.

Aiden claims that Chase (Jonathon McClendon) accidentally shot his mom as a toddler, but Hope’s not even sure that’s true anymore. It’s clear that Aiden is capable of anything.

Still, Hope could cause another scandal for Chase and possible charges for Aiden’s cover-up. Aiden argued that Hope couldn’t prove her accusations. He’s the one with the evidence. Aiden made a recording of Hope confessing to Stefano’s murder.

Besides, Hope would take Roman (Josh Taylor) and Rafe (Galen Gering) down with her if she doesn’t play along. Aiden knows that Hope would never make them pay for her mistakes. Bottom line, Hope’s back is against the wall and there’s just no way out.

Unfortunately, Days spoilers state that Rafe won’t be able to find a solution either. He’ll hate being powerless when Aiden is acting so smug. Hope will feel incredibly guilty for the position she’s put Rafe in. She’ll feel like she should talk to someone else about Aiden’s ruthlessness.

Days of Our Lives spoilers indicate that Hope will open up to Jennifer (Melissa Reeves). She’ll spill the whole story, including her murder admission. Jennifer will be stunned by the news that her cousin killed Stefano in cold blood.

Hope’s occupation makes all of this even worse. She’s supposed to protect and serve, not target and destroy.

However, Jennifer will understand why Hope did it. At the time, Hope had just lost Bo (Peter Reckell) and she was convinced that Stefano was the reason he died. Bo was kept in captivity while his brain tumor grew. Hope needed someone to blame and Stefano seemed like the perfect fit.

Hope also assumed that her new husband, Aiden, had just tried to kill her. She was out of her mind with grief and anger. Hope might’ve had a solid temporary insanity defense if she had come forward. Instead, she chose to keep the bloody scene a secret and it’s coming back to bite her.

Stefano’s hands were clean in that particular case, but that doesn’t mean he’s an innocent man. He got away with countless crimes over the years. Many of them specifically affected Hope and her family.

Days spoilers reveal that Jennifer will want to help Hope in some way. We know that Jennifer has a background in journalism. In fact, Jen will be serving as editor of the Salem Spectator pretty soon.

Perhaps Jennifer will put her investigative hat on and try to dig up some dirt. She needs to get Aiden off Hope’s back. Alas, the ball is already rolling on this revelation. If Aiden doesn’t take Hope down, Andre surely will. DOOL spoilers hint that Hope’s day of reckoning is rapidly approaching.

It sounds like some major drama is ahead on Days of Our Lives. We’ll give you updates as other details emerge. Stay tuned to DOOL and don’t forget to check CDL often for the latest Days of Our Lives spoilers, updates and news.

A fearful Hope wonders what Aiden wants after he insists she meet with him. #DAYS https://t.co/K42O1CLy9c pic.twitter.com/6indFOJqA8