‘Days of Our Lives’ Spoilers: Kate Shocked by Deimos’ Return From The Dead – Sneak Attack Has Kate Begging For Andre’s Help 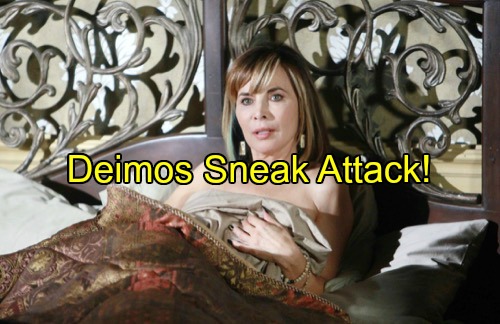 Days of Our Lives (DOOL) spoilers tease that Deimos (Vincent Irizarry) will have big plans for Kate (Lauren Koslow). Now that he’s had some time to recover at Chloe’s (Nadia Bjorlin) place, Deimos is ready to bring Kate down. He’ll think a sneak attack is the only way to truly get revenge on his newest enemy.

Of course, Nicole (Arianne Zucker) wouldn’t mind giving Kate a good dose of retribution. However, getting cleared of the charges is Nicole’s main focus right now. She’s been under a lot of stress and she just wants all of this to be over.

Days of Our Lives spoilers say Deimos will explain his scheme to Nicole and insist it’s the only way she’ll be free. They have to teach Kate a lesson or she could come after both of them again. Deimos has established himself as true villain on DOOL.

In other words, Deimos has no problem going up against anyone for any reason. Days viewers watched Deimos go to great lengths to get revenge on Victor (John Aniston). He held a grudge against his brother for 30 years, which means he certainly isn’t going to forgive and forget when it comes to Kate’s mistakes.

Days of Our Lives spoilers indicate that Deimos will lie low until the moment is right. Kate has already shown some flashes of fear, but you can expect her to panic as this plot gets underway. A huge surprise will await Kate when she returns home one evening.

It sounds like Deimos’ return will have Kate shaking in her boots. Deep down, Kate should have her doubts about Deimos’ death. After all, Nick (Blake Berris) showed up alive after Kate helped Sami (Alison Sweeney) and Gabi (Camlia Banus) toss him in the river.

A trip into the treacherous waters obviously isn’t a surefire way to kill someone.

Once Deimos reveals that he’s alive, it should be interesting to see what he has in store. Kate lied about her marriage to Deimos, took his wealth and framed Nicole for his murder. She’s got plenty to pay for.

Deimos could’ve just gone to the police, but Days fans know he doesn’t like to take the traditional route to justice.

We might be dealing with a bit of a “he said, she said” situation when it comes to the marriage itself. This union might work in Deimos’ favor anyway. Since Kate had the marriage documents drawn up after Deimos’ presumed death, it’s not clear if any prenuptial agreements were included. If they weren’t, Deimos might be able to divorce Kate and take half of her riches.

If Kate tries to object, Deimos could threaten to expose her whole scheme. He can hold this over Kate’s head forever if he wants to. Kate could essentially be Deimos’ slave from now on. Luckily, Andre (Thaao Penghlis) might have a trick or two up his sleeve.

That could mean good news for Kate initially, but it could also lead to trouble down the road.

Andre has dirt on Aiden (Daniel Cosgrove), so that at least guarantees Kate will have a lawyer in her corner. Unfortunately, Kate may get out of one jam and end up in another. Being under Andre’s thumb isn’t much better than being blackmailed by Deimos.

What does the future hold for overwhelmed Kate? Time will tell, but she’d better be ready!

Stay tuned for updates on DOOL’s looming threats. Voice your opinion in the comments below and don’t forget to check CDL often for the latest Days of Our Lives spoilers, updates and news.