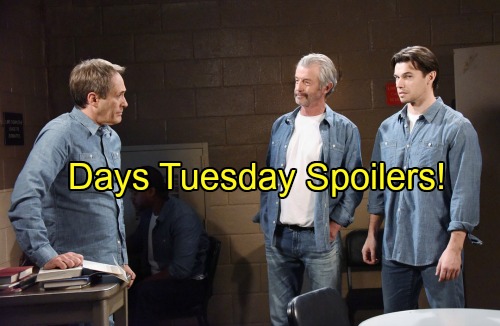 Days of Our Lives (DOOL) spoilers for Tuesday, September 6, tease that Kayla (Mary Beth Evans) will get fed up with Steve’s (Stephen Nichols) behavior. Kayla believes that therapy could help them sort out their problems. They can’t expect to repair their relationship without putting some effort into it.

Unfortunately, Steve doesn’t like the idea of digging up painful memories. He doesn’t think reliving that sorrow will do either of them any good. Steve bailed on their first therapy session and now it’s time to pay the price. Days of Our Lives spoilers say Kayla will let Steve know where she stands.

Kayla will insist that Steve’s reluctance to talk about their issues is concerning. She’ll feel like it proves that Steve isn’t capable of changing his ways. Steve believes he’s done enough to show Kayla how much she means to him. He moved out of the house to give her space and he switched to a less dangerous career as well.

However, Kayla might argue that Steve needs to be willing to do whatever it takes. This is really important to Kayla and she thinks Steve needs to make it work. In fact, Kayla may make this an ultimatum. If Steve can’t budge on something as simple as attending therapy, then there may not be a future for them.

Later this week, Days spoilers state that a medical scare could change everything for this couple. Let’s hope it makes both of them realize what’s truly important in life. Once Kayla pulls through her upcoming ordeal, maybe they’ll both be willing to compromise a little.

Meanwhile, someone else will get a good dose of therapy. After being contacted by Clyde (James Read), Marlena (Deidre Hall) will pay him a visit in prison. She won’t be thrilled about interacting with this ruthless criminal, but she’s always willing to provide her services to those who are struggling.

Clyde sought Marlena’s advice when he was in Salem and it looks like he wants some in the slammer, too. DOOL spoilers say Marlena will quickly discover that Clyde is as shady as ever. She’ll leave feeling like this was a wasted trip.

As Marlena exits, she’ll just miss seeing a familiar foe. Days of Our Lives spoilers reveal that Orpheus (George DelHoyo) will be nearby. If Orpheus spots Marlena, it could remind him of how much he wants revenge on the people of Salem. This is great timing since Clyde’s desires are bubbling up, too.

Once Clyde and Orpheus join forces with Xander (Paul Telfer), there’ll be no stopping them. Days fans won’t want to miss the action and excitement ahead. These criminals are about to put an evil plan in motion. Salemites had better be ready for the chaos and destruction.

Until then, Laura (Jaime Lyn Bauer) and Jennifer (Melissa Reeves) will have a tense conversation about Abigail (Kate Mansi). It appears Laura has some intriguing news and concerns. She’ll rip into Chad (Billy Flynn) later and it could lead to trouble. When Andre (Thaao Penghlis) hears Laura’s point of view, he’ll suspect she could be a useful team player.

Will Andre weave another tangled web? We’ll give you updates as more details emerge. Stay tuned to DOOL and don’t forget to check CDL often for the latest Days of Our Lives spoilers, updates and news.