‘Days of Our Lives’ Spoilers: Martha Madison Back on Set, Supports Marlena Through Crisis – More Belle and Shawn Scenes 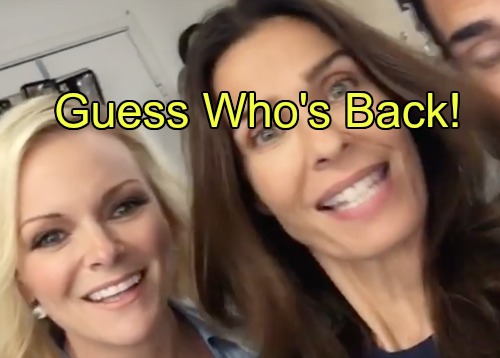 You may remember that both Madison and Brandon Beemer (Shawn) were fired in March. They were written out and supposedly taped an exit together. However, an error was made that meant Beemer would have to be paid whether he worked or not.

Naturally, Days wasn’t going to pay Beemer to sit at home. Beemer quickly returned, but Madison’s future with the show was uncertain. To some degree, it still is. Madison’s actual status isn’t clear at the moment.

Belle may pop up for a few episodes to usher Shawn off the canvas or they could both be sticking around indefinitely. Either way, it’s nice to know that more Shawn and Belle scenes are coming. There’s a chance that DOOL realized they made a huge mistake by getting rid of these popular characters.

As soon as updates were released on their firings, Days of Our Lives fans voiced their outrage on social media. Maybe the show saw the tremendous amount of support for these actors and their intriguing characters. If Belle and Shawn are here to stay, perhaps other casting shakeups have influenced that decision as well.

Jen Lilley (Theresa) has already taped her final appearances at DOOL and her exit will leave a hole that Belle could fill. John-Paul Lavoisier (Philip) is also out at Days. If a recast isn’t brought in, that’s just another reason why Shawn needs to remain in town.

They have the teen bracket covered. There are plenty of older characters, too. It’s the middle ground that needs to be beefed up. Plus, Shawn and Belle are connected to core families in Salem. They need to be there for their daughter, Claire (Olivia Rose Keegan), and their other loved ones.

There’s been some speculation that Belle will be back to support her mother through a crisis. Marlena (Deidre Hall) will want Belle by her side if something happens to John (Drake Hogestyn). Not too long ago, Hogestyn was hurt in an accident on set. Between the resulting legal issues and Hogestyn’s recovery, John will likely be MIA for a while.

It’s possible that John will simply leave for an investigation or something along those lines. Nobody would like that idea since John made such a big to-do about choosing Marlena over work last fall. Instead, Days of Our Lives might go with another abduction storyline. John could simply disappear and his family would frantically search for answers.

This type of plot has become a bit overdone at DOOL, but we’ll have some time between the Tate stuff and John’s potential ordeal. Unless they just pretend he’s busy off screen, they’ll have to explain John’s absence in some way. The whole captured thing is a good scenario to fall back on.

All of this gives us hope that Belle and Shawn will be around for longer than we thought. Will they get the opportunity to be key players in Salem? It should be interesting to see what unfolds. Stay tuned and don’t forget to check CDL often for the latest Days of Our Lives spoilers, updates and news.