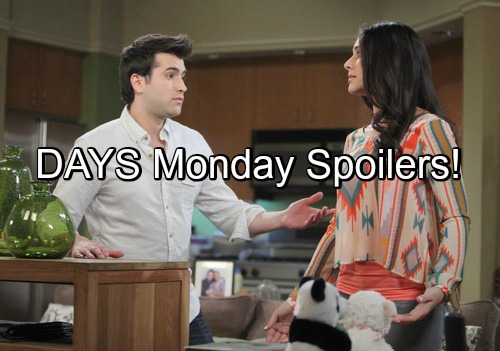 Days of Our Lives (DOOL) spoilers for Monday, August 29, tease that Sonny (Freddie Smith) and Paul (Christopher Sean) will bump into each other. Paul will suggest that Sonny should join him for lunch. They already spent a few moments catching up after Sonny’s return, but now there’s even more to talk about.

Paul has been heavily involved in the search for Tate and he knows that there’s evidence against Victor (John Aniston). In fact, DOOL spoilers state that proof will continue to pile up. Still, Sonny feels confident that Victor is innocent. He’s determined to prove that Victor has been set up.

Sonny vowed to do whatever it takes to help Victor. He told Justin (Wally Kurth) that the person who framed Victor obviously broke a lot of laws to do it. Sonny insisted that they’d just have to do the same thing. If getting Victor off the hook means playing dirty, Sonny has no problem with that.

Sonny’s days as a boy scout are apparently over. He’s developed a bit of an edge since Will’s (Guy Wilson) death, which is understandable. Sonny faced a horrible, devastating loss. He’s had to toughen up and press on. Days spoilers reveal that Paul will notice the changes in Sonny’s personality.

Sonny will open up about what he’s been through and how he wants to move forward. Paul will undoubtedly admire Sonny’s determination. It’s clear that Paul and Sonny are dealing with some lingering feelings, but they’ll both try to fight their attraction.

Days of Our Lives spoilers hint that a reunion will happen, but they’re not going to rush it. Sonny will concentrate on helping Victor and getting involved at Titan Industries. He won’t feel like he’s ready to be in another serious relationship just yet.

However, Sonny and Paul will definitely start to reconnect. It will take time, but they’ll get there. Sonny will keep working through his grief, too. Later this week, Sonny and Gabi (Camila Banus) will stop by Will’s grave. They’ll probably share fond memories of the man they cared about and discuss what the future will look like for Arianna (Sydnee and Harper Udell).

Meanwhile, Eduardo’s (A Martinez) announcement will get some strong reactions from his family. He’ll call everyone together for a meeting as he prepares to leave town. Days of Our Lives spoilers say Eduardo will want to protect his ex-wife and kids from the danger that tends to find him.

Eduardo doesn’t realize that Dario (Jordi Vilasuso) cooked up a plot to get his father out of their lives. Nevertheless, Eduardo will contend that he can’t put his family in peril any longer. Gabi will likely protest and she may get Adriana (Alma Delfina) or even Rafe (Galen Gering) to back her up.

We know Eduardo will be around as we head into fall, so it appears he’ll be convinced to stay in Salem. Elsewhere, Joey (James Lastovic) will also be in need of a little convincing. Kayla (Mary Beth Evans) will do her best to keep Joey on track with therapy. She’ll plan on squeezing in some sessions with Steve (Stephen Nichols) as well.

Things are looking up for Steve, Kayla and Joey. Sadly, Days spoilers indicate that the peace won’t last. We’ll give you updates as more news comes in. Stay tuned to DOOL and don’t forget to check CDL often for the latest Days of Our Lives spoilers, updates and news.