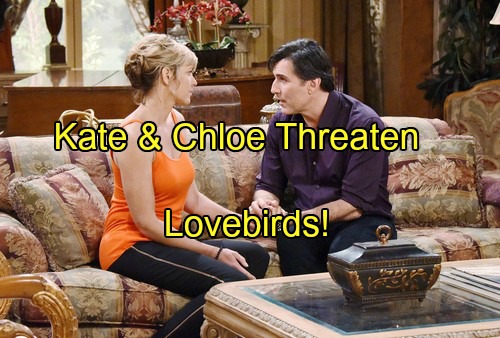 Days of Our Lives (DOOL) spoilers tease that Nicole (Arianne Zucker) will find herself feeling torn about Deimos (Vincent Irizarry). Nicole has been stuck in a battle between her head and her heart. She doesn’t really trust Deimos, but she still has feelings for him.

Nicole has been trying to proceed with caution. She needs some proof to be sure she’s making the right decision. Fortunately, Nicole will get at least a little evidence of the changes Deimos is making. Days of Our Lives spoilers say Nicole will get updates on Deimos’ involvement in Maggie’s (Suzanne Rogers) upcoming operation.

Deimos brought an expert surgeon out of retirement to perform Maggie’s procedure. He had to blackmail Dr. Hochman (Wolf Muser) to make it happen, but at least something good is coming out of it. Victor (John Aniston) previously reached out to the doc, but he didn’t have any luck. Deimos had no choice but to play dirty.

Of course, Nicole may or may not find out about Deimos’ approach. She’ll just be pleased that Deimos is doing something nice to make amends. Deimos realizes that actions speak louder than words. He’s willing to do whatever it takes to make Nicole happy and convince her to share a life with him.

Days spoilers reveal that Deimos and Nicole will enjoy another passionate encounter soon. He’ll ask Nicole to move in with him in hopes of growing closer. Nicole doesn’t seem ready to accept Deimos’ proposal, so he might think of this as a compromise. Deimos simply wants to spend every minute he can with Nicole by his side.

Nicole will mull over Deimos’ latest offer, but more drama is looming. Days fans know that Kate (Lauren Koslow) and Deimos have had a rocky relationship. They managed to reach an agreement after Kate’s blow to the head sent Deimos into the river. However, Deimos warned Kate that she’d better back off.

If Kate causes any trouble, Deimos has vowed to make her pay. Regrettably, Kate doesn’t scare very easily. She won’t hesitate to push Deimos’ buttons. When Kate gets a threat, she’s not afraid to toss around a few of her own.

It looks like Kate will have an issue with DOOL’s new lovebirds. Days of Our Lives spoilers say Kate will have a heated confrontation with Nicole and Deimos. She’ll step up to speak her mind. There’s plenty of bad blood between Kate and Nicole at the moment.

Nicole stole Deimos away from Kate and the latter was furious. Then, Kate framed Nicole for Deimos’ murder. She would’ve let Nicole go to prison if Deimos hadn’t shown up alive. Kate plays by her own rules and none of them involve helping anyone else.

Nevertheless, Kate’s beef is the least of Nicole and Deimos’ problems. Chloe (Nadia Bjorlin) is pregnant with Deimos’ baby and that’s going to cause quite a stir down the road. We’ll keep you posted as additional news comes in. Stay tuned to DOOL and don’t forget to check CDL often for the latest Days of Our Lives spoilers, updates and news.