Days of Our Lives (DOOL) Spoilers: Roman Rejects Joey’s Confession – Steve and Kayla Go on the Run as a Family? 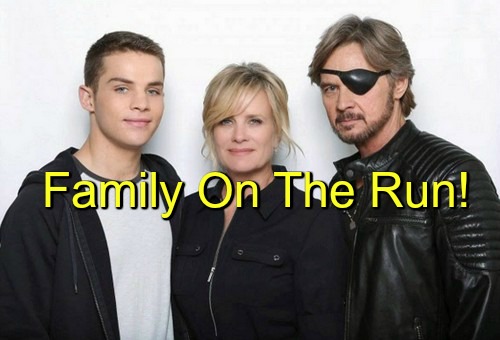 “Days of Our Lives” spoilers tease that on Friday’s episode tomorrow and continuing on next week’s episodes a guilty confession will wreck havoc on a Salem family. Joey (James Lastovic) will decide that he just can’t take it anymore.

The guilt of killing Ava (Tamara Braun) and letting Steve (Stephen Nichols) take the fall is simply too much to bear. DOOL spoilers say Joey will track down Roman (Josh Taylor) and blurt out the truth. Joey will insist that Steve had nothing to do with Ava’s murder.

Unfortunately, Roman will tell Joey that he doesn’t buy his story. “Days of Our Lives” spoilers indicate that Roman will completely dismiss the confession. Of course, Roman already seemed suspicious of Joey when his blood was found on Ava’s pillow. Joey’s bandage was dropped in the hospital room as well.

Steve made up an excuse and urged Roman to leave Joey out of this. Perhaps that’s why Roman will act like Joey’s claims are a bunch of baloney. Roman knows that Steve wants to protect his boy and he can relate to his situation.

There’s no doubt that Roman would take Eric’s (Greg Vaughan) place in court if he could. Maybe Roman is just trying to let Steve take the blame like he wants to.

Later, Joey will inform Steve and Kayla (Mary Beth Evans) that his confession efforts failed. They’ll be happy to hear Joey wasn’t arrested, but they’ll worry about the future. Steve spent a long time away from Kayla and Joey, but he’s finally back in their lives. Now these charges are threatening to rip their family apart once again.

“Days” spoilers reveal that Steve, Kayla and Joey will be determined to stick together. They’ll ponder the idea of going on the run and leaving this whole mess behind. Steve has some serious skills when it comes to disappearing. He could probably help his family pull it off.

However, it looks like Nichols, Evans and Lastovic are all still taping at DOOL. There’s a good chance their characters will end up staying in Salem. If they do skip town, they won’t be gone long. Will Steve find a way to beat the rap? Stay tuned to “Days of Our Lives” for updates on this Johnson family crisis.

So “Days” fans, what do you think about the news that Joey will spill his guts to Roman? Are you surprised that Roman will reject Joey’s confession? Will Steve, Kayla and Joey try to make a break for it? What might stop them from leaving?