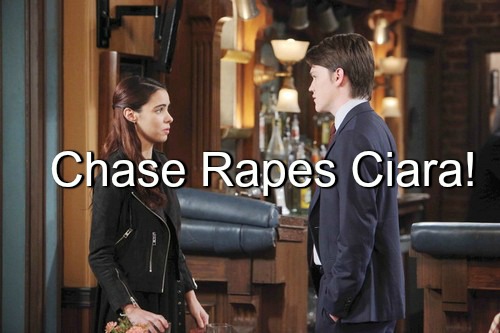 “Days of Our Lives” (DOOL) spoilers reveal that Chase (Jonathon McClendon) is about to take a VERY dark turn. Andre (Thaao Penghlis) befriended Chase and he’s setting himself up to be a wicked mentor. DOOL spoilers indicate that Andre will offer some terrible advice to help Chase solve his current problems.

We don’t know all the details, but it’s clear that Andre will be aiming to hurt Hope (Kristian Alfonso) through Chase. However, it looks like Andre will be surprised by how far Chase is willing to go. “Days” viewers might be stunned as well.

Although it hasn’t been officially confirmed, DOOL buzz is hinting that Chase will rape Ciara (Vivian Jovanni). If that’s true, it’s sure to be a shocking episode. It’s doubtful “Days of Our Lives” would flat-out show an entire teen rape scene, but the implication should be there.

We also know that Ciara and Marlena will be on screen together in a therapy context down the road. That could be further proof that Chase does the unthinkable. Of course, Theo (Kyler Pettis) or someone else might stop Chase from actually doing the deed. Still, the fact that Chase would do this could take him to an incredibly villainous level.

It’s not impossible to redeem characters that commit this transgression in the soap world, but it’s ridiculously hard. Even in cases like Jack (Matthew Ashford) where the offender is remorseful, there’s always a black mark on the character’s record. Nevertheless, “Days of Our Lives” writers just might go there with Chase.

After this heinous encounter, Chase could continue to do evil acts for Andre. Once Chase gets a little taste of the dark side, he may embrace it. Perhaps that’s why Aiden (Daniel Cosgrove) is slated to return this spring. Maybe Aiden will appear to Chase in a vision or dream and warn him about this dangerous path he’s headed down.

Whatever happens, it sounds like Chase is going to be quite sinister soon. They seem to be destroying the character’s long-term potential with the show. Chase may not last very long if he rapes Hope’s beloved daughter. Stick with the NBC soap for updates on the intense drama and the horrific fallout.

So “Days” fans, what do you think about the news that Chase will allow himself to be manipulated by Andre? Will Chase really rape Ciara or will someone stop him before he gets the chance?

Is Chase probably on his way out at DOOL? Voice your opinion in the comments below and don’t forget to check CDL often for the latest “Days of Our Lives” spoilers, updates and news.