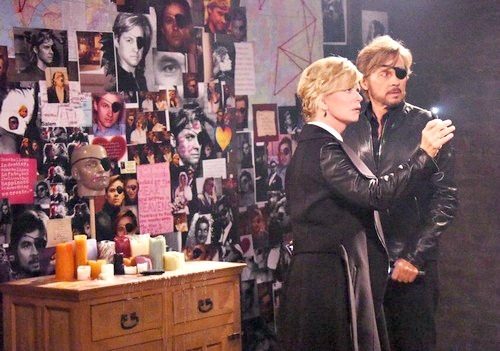 “Days of Our Lives” (DOOL) spoilers reveal that in upcoming episodes Steve (Stephen Nichols) will get help from Kayla (Mary Beth Evans) as he fights to prove his innocence. Steve couldn’t let Joey (James Lastovic) go to jail for killing Ava (Tamara Braun), so he confessed to the crime himself. However, Steve doesn’t particularly want to end up in prison either. He’ll have some work to do if he hopes to avoid a permanent stay in the slammer.

DOOL fans saw Steve find a key in Ava’s hotel room. Now Steve just has to figure out what this key opens. “Days of Our Lives” spoilers say Steve’s investigation will eventually lead him to a certain door. What’s behind that door will make Steve’s jaw drop.

It seems Ava’s madness went even deeper than we thought. Days spoilers reveal that Ava made a massive shrine to Steve in what appears to be a dark and creepy basement. “Days” spoilers tease that Steve show Kayla this shrine and they’ll be amazed at how obsessed Ava truly was.

We’re talking about an entire wall of Steve’s pictures, maps of Salem and motivational quotes. Perhaps Ava needed a bit of inspiration in her efforts to win her love. Did we mention there’s a lipstick-stained mannequin head with an eye patch on? Too far, Ava. Too far.

On the opposite wall, Steve and Kayla will find what looks like a picture of Kayla with red writing scrawled across her face. Ava was likely ruining Kayla’s photo as a stand-in. She had to have something to do before she was able to torment the real thing.

After Steve and Kayla get over the shock, they’ll realize this discovery could be good news. Steve desperately needs prove he killed Ava in self-defense. The shrine will verify that Ava had an alarming obsession with Steve.

Ava probably would’ve killed Kayla if she continued to get in the way. If that didn’t work, Ava might’ve killed Steve as well. Once Ava ran out of options, she could’ve decided that Steve would die if he wouldn’t be with her. Ava was definitely dangerous and her little Steve sanctuary shows she was out of her mind.

Will this be the first step in getting Steve off the hook? Let’s hope so. Most DOOL viewers want Steve, Kayla and Joey to finally get a breather. They deserve it after this mess! Stick with “Days of Our Lives” for updates on what the future holds for this family.

So “Days” fans, what do you think about the news that Steve and Kayla will locate Ava’s shrine? Will their bizarre findings help Steve beat the charges? Voice your opinion in the comments below and don’t forget to check CDL often for the latest “Days of Our Lives” spoilers, updates and news.