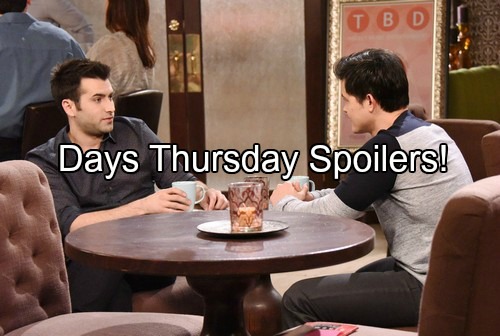 Days of Our Lives (DOOL) spoilers for Thursday, July 28, tease that Sonny (Freddie Smith) and Paul (Christopher Sean) will have an opportunity to catch up. Paul will be surprised to see that Sonny is back in Salem. He’ll wonder how long his former flame will be in town. Sonny will state that he’s here to stay. Days viewers will enjoy a lengthy stint for Sonny this time around.

Sonny’s chat will Paul will be a pleasant one, but the same can’t be said for his upcoming conversation with Deimos (Vincent Irizarry). Days of Our Lives spoilers reveal that Sonny will lash out at Deimos for everything he’s done to Maggie (Suzanne Rogers) and Victor (John Aniston). Sonny won’t hold back as he confronts Deimos about his atrocious actions.

Of course, Deimos is trying to turn things around. He reached out to a retired surgeon about restoring Maggie’s ability to walk. Dr. Hochman (Wolf Muser) has agreed to perform the operation, which is excellent news. Deimos had to blackmail the doc to make this happen, but we can’t expect Deimos to change entirely. He’s always going to be a little shady, but at least he’s finally using his powers for good.

Victor and Maggie will learn that this surgery could be the solution they’ve been looking for. They’ll hope that Maggie’s life will return to normal in the near future. Stick with Days of Our Lives for updates on Deimos’ attempt to make peace with Victor and his family.

Other DOOL spoilers indicate that Theresa (Jen Lilley) will have an enlightening dream. Perhaps she’ll suddenly have some clarity about Tate’s kidnapping. Days fans know that Theresa recalls seeing a shadowy figure just before Tate was snatched. She couldn’t quite see the person’s face, but Marlena (Deidre Hall) suggested that it might become clear eventually.

Will Theresa’s dream involve Summer (Marie Wilson) approaching Tate’s stroller? It’s a possibility since Summer and Theresa will have an epic faceoff soon. DOOL’s weekly preview video shows Theresa lunging at Summer and demanding answers about her missing child. Theresa is obviously not convinced that Summer is innocent.

Regardless of Summer’s culpability, she won’t be pleased with Theresa’s accusations. She’ll even threaten Theresa’s life and shove her to the ground. An explosive confrontation is on the way. Summer’s last airdate is rapidly approaching, so she could end up dead or in prison if she makes another wrong move.

Meanwhile, John (Drake Hogestyn) will continue to follow the weak trail in Tate’s kidnapping. A new lead will emerge, but it probably won’t pan out. Fortunately, John won’t give up. Days of Our Lives spoilers say a different clue will surface later and this one could prove useful.

Next week, John will head to Indianapolis in hopes of learning more information. Will John find the key to the case or just a dead end? Could danger await? We’re excited to see what unfolds. Stay tuned to DOOL and don’t forget to check CDL often for the latest Days of Our Lives spoilers, updates and news.