‘Days of Our Lives’ Spoilers: Victor Schemes, Turns on Kate Like A Viper – Belle Blasts Nicole and Dario 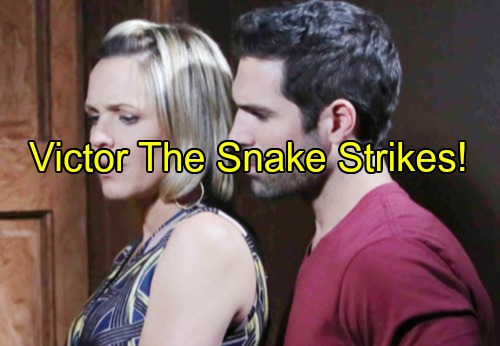 Days of Our Lives (DOOL) spoilers tease that Belle (Martha Madison) will have a mess on her hands. Nicole (Arianne Zucker) is being accused of murder and there are countless people who want her do go down. There isn’t solid proof that Nicole killed Deimos (Vincent Irizarry), but that never matters in Salem.

Anyone can get locked up if someone else wants it bad enough.

Belle is a decent defense attorney, but she can’t work miracles. She was already facing an uphill battle and now Nicole has made it even worse by getting herself arrested. It looks like Belle will have to take on another client, too. Dario (Jordi Vilasuso) will probably require Belle’s services since he was Nicole’s partner in crime.

Days of Our Lives spoilers reveal that Belle won’t be pleased with Nicole and Dario’s actions. She’ll rip into them for making her job even harder. Belle will warn Nicole that her stupid moves could cost her. Nicole had better get her act together and let Belle do her thing.

Elsewhere, DOOL spoilers state that Victor (John Aniston) will try to keep his eye on the prize. He assumes Deimos is dead and he’s ready to get back what he’s lost. Victor cut a deal with Kate (Lauren Koslow) to regain control of Titan Industries.

He suggested that Kate could keep the mansion and his fortune. In exchange, Victor will make sure Nicole takes the fall.

However, will Victor truly be satisfied with that agreement? If Victor would double-cross Nicole, he’d do the same thing to Kate. She’ll definitely need to watch her back moving forward. Days buzz hints that Kate will find herself in a major bind down the road. It seems Kate may have to turn to Andre (Thaao Penghlis) for help.

In the meantime, Roman (Josh Taylor) will realize that some evidence has vanished. He’ll inform Justin (Wally Kurth) that they’re investigating the disappearance of this proof. It’s possible that this pertains to the case Justin altered as part of Deimos’ test.

Then again, this could be about the murder investigation. We don’t know whether this might be good news or bad news for Nicole, but it may not matter for the moment. Nicole is in hot water and she desperately needs Deimos to return from the “dead.” It’s too bad he’s busy bonding with Chloe (Nadia Bjorlin).

Nicole may be stuck in this chaos until Deimos decides to resurface. Days spoilers say Chloe will start digging around soon. There’s a chance she’ll help Nicole out. Perhaps Deimos, Chloe and Nicole could all team up to defeat Kate.

She obviously deserves to pay for what she’s done. That might be when Andre will enter the picture. Stick with Days of Our Lives for updates on the trouble headed Kate’s way.

So Days fans, what do you think about the heat Nicole and Dario will take from Belle? Will Victor betray Kate? How will Kate get out of her upcoming jam? Could Andre play a role in fixing all of this?