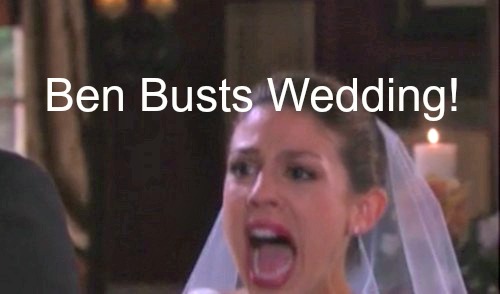 “Days of Our Lives” spoilers for the episodes during the next week of March 7-11 reveal that Abigail’s (Kate Mansi) nerves will kick in as she realizes her crazy ex is on the loose. Ben (Robert Scott Wilson) has escaped from the psychiatric hospital and that could spell bad news for Chad (Billy Flynn) and Abby’s nuptials. JJ (Casey Moss) and Chad will want Abigail to remain calm, which means a few fibs will be told.

DOOL spoilers say Abigail will be relieved when she hears that Ben is moving toward the border. It’s a lie, but Abby will buy it. She’ll state that Ben wouldn’t show his face at the mansion and risk getting captured. However, there’s a good chance Abigail will be nervous deep down. She won’t truly feel safe until Ben is locked up.

Nevertheless, the date is set and they’ll be determined to tie the knot. “Days of Our Lives” spoilers indicate that Chad and Abigail will beam as they prepare to exchange vows. Suddenly, something will go terribly wrong. DOOL’s weekly preview video shows Abby shrieking in horror.

Here’s where things could get tricky. Will Ben crash the wedding or is there another explanation for Abigail’s fright? It’s possible that the fears in the back of Abigail’s mind will cause her to imagine seeing Ben. Based on all the pictures that have been circulating, it almost seems like the guests are a bit too calm to have a murderer in the room. They look more concerned than horrified.

On the other hand, Days spoilers suggest that maybe the pics were snapped just before any of them had time to really react to the mayhem. Abigail might be the only one who sees Ben at first. Unlike most of the other soaps, “Days of Our Lives” doesn’t usually have a lot of fake-outs.

There’s still a possibility that Ben will appear right before their very eyes. If that happens, will Ben be apprehended or will he dash off once again? “Days” viewers will have to stay tuned!

Fortunately, we can confirm that Chad and Abigail will indeed become Mr. and Mrs. DiMera. Days spoilers for next week’s episodes tease that they’ll head off on their honeymoon soon. Stick with the NBC soap for updates on what’s next for these newlyweds.

So “Days” fans, what do you think about Abigail’s wedding scare? Will Abby have a vision of Ben or will he actually show up? How long will Ben be a threat? Voice your opinion in the comments below and don’t forget to check CDL often for the latest “Days of Our Lives” spoilers, updates and news.