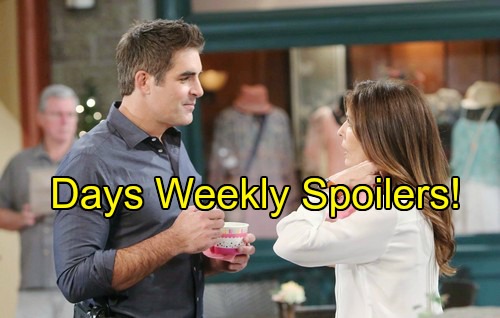 Days of Our Lives (DOOL) spoilers for the week of August 1-5 tease that some families will come together, but others will be torn apart. First, Hope (Kristian Alfonso) will arrive home after her brief stint in the hospital. The explosion led to a few injuries, but Salem’s doctors patched Hope up. She’ll try to block out this traumatic incident and move forward.

Ciara (Vivian Jovanni) has moved home so her mom has someone to take care of her. DOOL spoilers say Hope will appreciate having her daughter around. She’ll get a chance to reconnect with Rafe (Galen Gering) this week as well. It won’t be long until love is in the air. A very romantic night is in their future.

Days of Our Lives spoilers hint that romance will also be on John (Drake Hogestyn) and Marlena’s (Deidre Hall) minds. After John gets a new clue about Tate’s kidnapping, he’ll plan a trip to Indianapolis to gather more info. Of course, John will spend a little time cozying up to “Doc” before he heads out.

Elsewhere, a new family will be forming thanks to Chloe’s (Nadia Bjorlin) sofa romp with Deimos (Vincent Irizarry). She’ll be in a tizzy when she discovers that she’s pregnant. Philip (John-Paul Lavoisier) will be shocked by the news, but he’ll want to help Chloe in any way he can. Right now, Chloe may just need a shoulder to cry on.

Days spoilers say Chad (Billy Flynn) will need some comfort, too. Unfortunately, his problems will continue to pile up. Jennifer (Melissa Reeves) will come at Chad hard over this custody issue. Chad will fight for Thomas, but a terrible phone call will put Chad’s whole world on hold.

Someone will give Chad updates on Abigail’s (Kate Mansi) status. Chad has been trying to hold out hope in spite of Andre’s (Thaao Penghlis) evidence. He just can’t bring himself to admit that Abigail could be gone for good.

However, Chad’s last glimmer of optimism will shatter along with the glass he throws against the wall. Jennifer will be stunned and deeply saddened by the loss of her daughter. JJ’s (Casey Moss) grief will mostly come out in the form of anger. He’ll blame Chad for sending Abby to Shady Hills in the first place.

If you’ve been paying attention to Days spoilers, you know that Abigail is still alive. Marci Miller will debut in the role this fall. Chad and the remaining Deveraux family members aren’t in the loop. They have nothing left to cling to.

Jack (Matthew Ashford) will appear in Jennifer’s fantasy as she struggles with her loss. It’s going to be a tough week for this weary mother. Let’s hope Jack can help Jennifer find the strength to get through this.

Days of Our Lives viewers will definitely want to check out all of the action. Starting August 8, DOOL will be on a two-week hiatus while NBC airs Olympics coverage with new shows returning on August 22. We’ll let you know what’s coming up after the break and CDL will provide new Days reports every day during the Games. Stay tuned and don’t forget to check CDL often for the latest Days of Our Lives spoilers, updates and news.