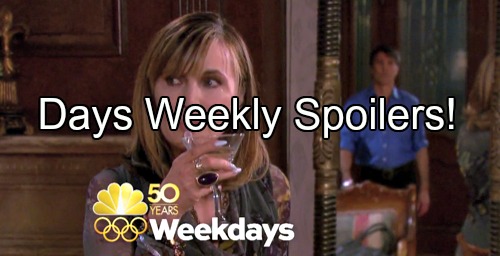 Days of Our Lives (DOOL) spoilers for the week of June 27 to July 1 tease that we’ll see several surprises and interesting connections. Victor (John Aniston) has a lot on his mind right now and he’ll feel the need to unload on Caroline (Peggy McCay). Luckily, Caroline has great affection for her dear friend. She’ll be happy to provide support after Victor vents.

Meanwhile, Andre (Thaao Penghlis) and Kate (Lauren Koslow) will also share a moment of friendship. Of course, these two won’t trust each other one bit and that’s OK. They’ll realize that they can benefit from a sneaky partnership. It’s all about give and take.

As long as they both have something at stake, Kate and Andre will be just fine. They’ll enjoy a meal together as they plot their next move.

Speaking of plotting, Deimos (Vincent Irizarry) is about to put a revenge scheme in motion. DOOL spoilers say Nicole (Arianne Zucker) will want Deimos to get her off the hook for his murder. Deimos will agree, but he’ll intend on making Kate pay the price before he does anything else.

Other Days of Our Lives spoilers suggest that Hope (Kristian Alfonso) and Aiden (Daniel Cosgrove) will have some ups and downs on their romantic getaway. They’re currently at Green Mountain Lodge and things are starting to heat up.

Unfortunately, Hope won’t be able to forget the night she thought Aiden was trying to kill her.

Days spoilers say Hope’s memory of that terrible evening will stop her from moving too fast with Aiden. However, Aiden will settle Hope down and they’ll at least spend some time bonding. Aiden is willing to be patient with Hope. He’ll wait as long as it takes if it means he gets the woman he wants. 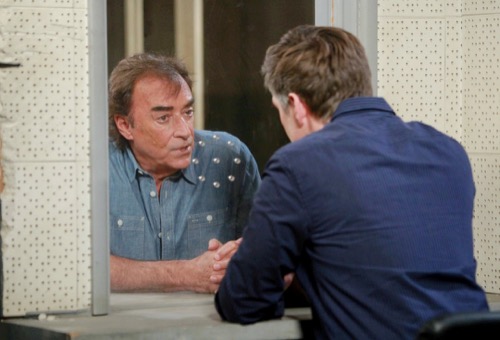 In Salem, Rafe (Galen Gering) will try to prove that Aiden is shady and he’ll quickly get a solid lead. Security footage will show that Aiden met with Andre in jail. This isn’t good news for Aiden, but he’ll plan on turning the tables soon enough.

Elsewhere, DOOL spoilers indicate that Theresa (Jen Lilley) will feel stressed out from trying to run her company without Nicole. It’s been tough to handle the workload on her own, especially with a wedding coming up and a toddler to care for. Lack of sleep is taking a toll as well.

Theresa will take Tate to the park, but she’ll end up dozing off. Uh-oh. It sounds like a baby snatching could be in the works. Summer (Marie Wilson) will likely be involved. She’ll receive money and strict orders in her hotel room during that same time frame.

Summer will also have to face the music regarding the cover-up of Clark’s (Josh Burrow) death. Clark’s sister, Janet (Alla Korat), will demand the truth and you can bet Brady (Eric Martsolf) will want the same thing. Summer will undoubtedly feel their wrath once she comes clean.

While Brady confronts Summer, Ciara (Vivian Jovanni) will encounter Chase (Jonathon McClendon) as she volunteers at the psychiatric facility. Ciara wants to stay strong, but can she really stand looking at the face of her rapist day after day? Stick with Days of Our Lives for updates on how this arrangement will work out.

So Days fans, what do you think about these hot storylines? Voice your opinion in the comments below and don’t forget to check CDL often for the latest Days of Our Lives spoilers, updates and news.