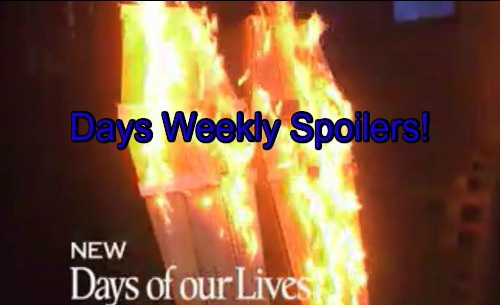 Days of Our Lives (DOOL) spoilers for the week of October 31 – November 4 tease that viewers will be treated to some exciting episodes. Chloe’s (Nadia Bjorlin) baby storyline will heat up when Philip (John-Paul Lavoisier) gives Nicole (Arianne Zucker) some surprising info. He’ll tell Nicole that the paternity test wasn’t tampered with after all.

Nicole will be taken aback by the news that Deimos (Vincent Irizarry) isn’t really the father. She might feel a little guilty for getting his hopes up. However, Deimos certainly won’t give up without proof. Days of Our Lives spoilers indicate that Deimos will track down Chloe’s mom, Nancy (Patrika Darbo). 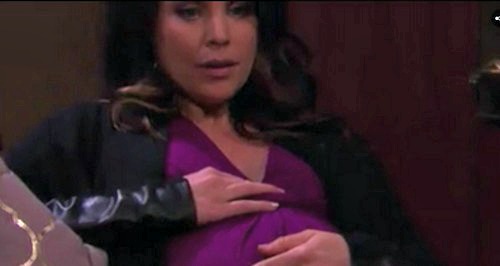 Nancy may not know much, but Deimos will hope that she can provide some hints. He’ll want answers about Chloe’s location so he can obtain a second paternity test. Later, Philip will also drop by. He’ll need to find Chloe so they can hash things out.

Elsewhere, DOOL spoilers say Theresa (Jen Lilley) will find herself in deep trouble. She’ll get updates on Guillermo’s (Kurt Caceres) arrival in Salem. This shady dude is the reason for Theresa’s six felonies. When Theresa realizes Guillermo knows where she lives, she’ll worry about what he might do. 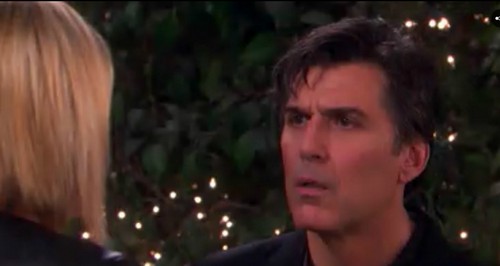 Fortunately, Shane (Charles Shaughnessy) will be around to help. Part of Theresa will be happy to see her father and another part of her will wonder where the heck he’s been. Shane’s grandchild was kidnapped, but he never bothered to show up.

Unlike Theresa, we know that’s because they couldn’t get Shaughnessy back for the stint! Oh well. Tate’s fine and Shane’s here now. That’s all that matters. Days of Our Lives spoilers indicate that Kim (Patsy Pease) will arrive later and they’ll explain their plan to Theresa. 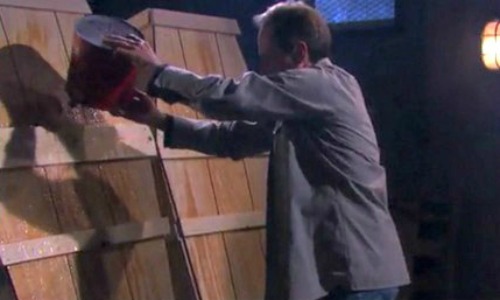 Shane is with the ISA and he’s been trying to track Guillermo for a decade. This dangerous criminal is involved with a drug cartel and he’s apparently quite slippery. Kim and Shane will think it’s too risky for Theresa to remain in town. They’ll urge her to take Brady (Eric Martsolf) and Tate on the run, but Theresa will propose a different idea.

Other Days spoilers reveal that Hope (Kristian Alfonso) will face backlash for killing Stefano (Joseph Mascolo). After Hope is arrested, she’ll admit her guilt and face Chad’s (Billy Flynn) wrath. Ciara (Vivian Jovanni) will try to get to the bottom of her mom’s bizarre behavior as well. She’ll want Hope to explain how this even happened. 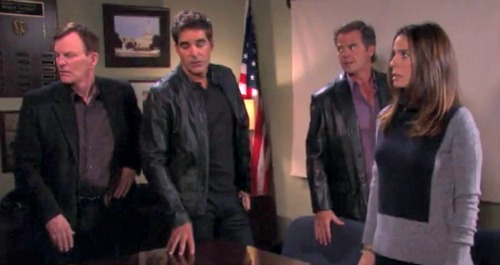 As Steve and John take care of business, Paul (Christopher Sean) will find himself dealing with another emergency. Sonny (Freddie Smith) will pitch in if he can. Once the problem has been solved, Paul and Derrick (Spencer Neville) will ask Sonny to join them for some fun. 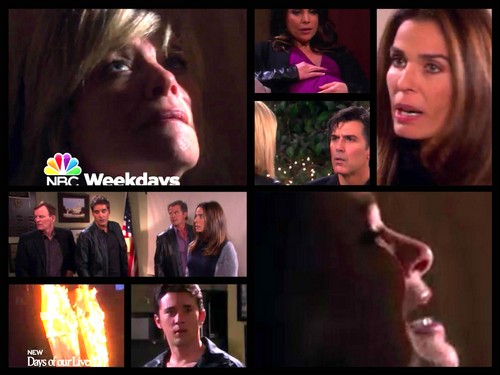 Sonny may not want to be a third wheel. Will Derrick and Paul change Sonny’s mind? Stay tuned to DOOL and don’t forget to check CDL often for the latest Days of Our Lives spoilers, updates and news.

There's nothing like bingeing #DAYS with the one you love. https://t.co/H2Wx3EFLXR pic.twitter.com/WnQCgT9hpj