‘Days of Our Lives’ Spoilers: Will’s Return From The ‘Dead’ Changes Sonny’s Mind About Paul Reconnection? 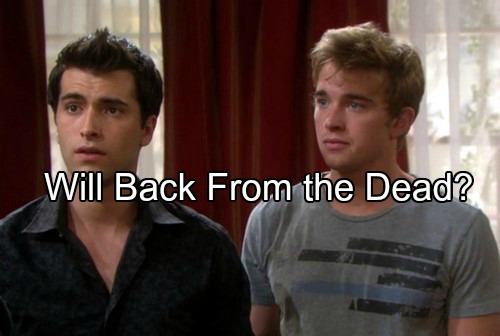 Days of Our Lives (DOOL) spoilers tease that Sonny (Freddie Smith) will soon get down to business. Since Club TBD has been sold, Sonny will choose to move up the corporate ladder. We’ll see a mature and driven side of Sonny in the coming months.

Sonny will mostly concentrate on building his career and helping out his loved ones. Nevertheless, we’ll undoubtedly see Sonny and Paul (Christopher Sean) grow closer in the midst of it all. They’ll remain friends for now, which is really for the best.

Sonny is still grieving over Will. He shouldn’t get involved with Paul before he’s ready. That would only lead to more heartbreak for both of them. Fortunately, Sonny will be sticking around for a while. There’s no need to rush their relationship. We have plenty of time to let this play out.

Days viewers can probably expect Paul and Sonny to rekindle their romance at some point though. There’s just so much history between them. We’re definitely going to see their attraction grow stronger from here on out.

It’s worth mentioning that there’s continued Days buzz out there about Chandler Massey’s possible return as Will. There seemed to be a little behind-the-scenes drama between Massey and DOOL before he left, but people often let bygones be bygones in this industry. Everyone has had cooled off by now.

Actors are usually willing to forgive and forget if a hefty paycheck is involved. Producers may not care what happened in the past as long as fans tune in. Regardless, there have certainly been some rumblings about Massey’s potential comeback.

Days of Our Lives has been bringing up Will’s name a lot lately. Sonny may slowly let go of Will and put his pain behind him. He could eventually give his heart to Paul and they could have a fresh start.

Wouldn’t that be the perfect moment for Will to return from the “dead”? Perhaps Will was actually switched with an evil lookalike when he was working in California. It could’ve been part of some DiMera plot against Sami (Alison Sweeney) or something along those lines.

Will could finally make it out of captivity and rush home to find that Sonny is in love with Paul. That would create a great love triangle. The interesting part would be that Will wouldn’t have done all of the lying and cheating. His doppelganger would be the culprit.

Sonny would be choosing from two upstanding guys. The playing field would be level. It would neat to see who Sonny would pick. Will would have a real shot at winning Sonny back. If Freddie Smith decides to take another extended break from Days of Our Lives, this would be a good way to usher Sonny off canvas again.

Sonny could choose Will and they could leave town together to reconnect. If Massey only wants a brief stint, maybe they’re saving his return for this very scenario. We’ll give you updates if we hear any news about the possibility. Stay tuned to DOOL and don’t forget to check CDL often for the latest Days of Our Lives spoilers, updates and news.