2016 Daytime Emmy Awards Winners List Revealed – Who Was Robbed and Who Earned The Win?

BY Stormy Elizabeth on May 4, 2016 | Comments: 3 comments
Related : Days of Our Lives, General Hospital, Hot News, Soap Opera, Spoiler, Television, The Bold and the Beautiful, The Young and the Restless, TV 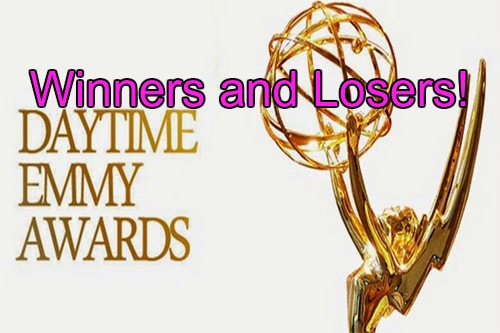 The Daytime Emmy Awards 2016 were presented this weekend in a two-night ceremony and “General Hospital” walked away with a whopping nine awards, “The Young and The Restless” had a decent showing while “Days of Our Lives” and “The Bold and The Beautiful” were barely recognized. What do you think of the results of the 2016 Daytime Emmy Awards?

Outstanding Drama Series went to “General Hospital” for both the series overall and the directing team despite their consistent third place in the ratings. They did have some good stories the past year with the resurrection of Jason Morgan and Jake Spencer.

Outstanding Drama Series Writing Team went to “The Bold and The Beautiful” but it was the same old stuff outside of the transgender surrogacy story. We have to admit we were hoping Ron Carlivati would win for GH so he would take the stage and blast ABC executives.

Outstanding Lead Actress went to Mary Beth Evans for “Days of Our Lives” and she had a very strong storyline and was deserving of the nomination and the award for her DOOL work – not every nominee or winner had a storyline that justified their nomination.

Outstanding Lead Actor from GH was Tyler Christopher but this is a head scratcher since his main story arc over the past year of plotlines was lying and going semi-dark. If he had gone full-Cassadine, that might have been better – we’re also surprised Anthony Geary didn’t take it again.

Outstanding Supporting Actress Jessica Collins definitely earned her hardware as Y&R’s Avery Bailey Clark with her timely and disturbing rape storyline that touched many lives. Her award is a nice nod for an actress that fans hated to see depart “The Young and The Restless.”

Outstanding Supporting Actor from “General Hospital” Shawn Blakemore is a bit of a question mark also since he had very little storyline and has been mostly offscreen – he had one poignant scene then went to jail. However, the other nominees were also middling.

Outstanding Younger Actress went to True O’Brien from “Days of Our Lives” for her work as now-dead Paige Larson. The necktie killer plot was of great interest and definitely justified DOOL’s second acting trophy of the night but was she the best in this category?

Outstanding Younger Actor winner Bryan Craig of GH deserved his trophy – that’s for sure. The work he did as mob son Morgan Corinthos struggling with bipolar disorder was remarkable and the first time he’s been truly challenged in his role on the ABC soap.

It’s also nice to see the Digital Drama Series get their props as The Bay swept that category with wins for Mary Beth Evans (the sole two-trophy winner of the Emmys), best series and best actor Kristos Andrews. If ratings keep tanking for soaps, digital drama is all we may be left with one day…

What do you think Soap Fans? Is there anyone that you think walked away with a Daytime Emmy Award trophy that didn’t deserve the win? Who do you think got robbed? Brooklyn Rae Silzer comes to mind as someone who should have won but did not.

Share your comments below and come back to CDL every day for more soap spoilers and news.

The 2016 Daytime Emmy Awards held at The Westin Bonaventure Hotel in Los Angeles, California on May 1, 2016 by FameFlynet