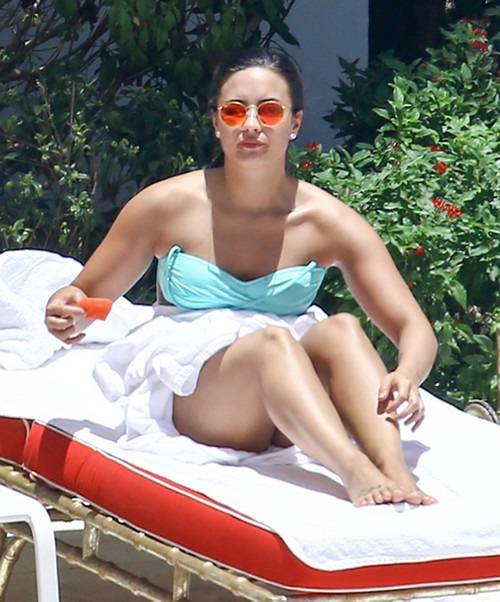 Pop star Demi Lovato is living life with a carefree attitude these days following her break-up with That 70’s Show’s Wilmer Valderrama. The once troubled singer gave her fans one hell of a pre-show on Snapchat on Friday before hitting the stage at Barclays Center in Brooklyn, New York for her Future Now Tour with Nick Jonas.

Demi Lovato treated fans to a risqué bit of twerking, shaking her solid body and booty in an all black high cut leotard with a set of nude nylons. Not the Demi we are used to, but maybe the 23-year-old is enjoying her new found freedom since splitting with Valderrama back in June.

Lovato’s sexy impromptu backstage performance for her social media fans was captured while the former American Idol judge was in the midst of making a wardrobe change. Demi’s sexy bodysuit was just part of the singer’s stage ensemble; black thigh high boots and a lacy overlay on top.

This latest Snapchat video comes off the heels of the singer’s racy Body Say music video due out soon. In anticipation of the video, Lovato shed her clothes for a roll in white sheets, showing off her curves with a set of hot still shots of the moments with her fans.

Proving that the singer’s life post Wilmer Valderrama is an exciting one and not something she is heartbroken over. Could Nick Jonas be the reason why?

Lovato and Valderrama’s split after nearly 6 years together. Prior to the couple’s break-up, Lovato’s grandmother passed away. Later that month, Demi kicked off her tour with Nick Jonas, her new business partner, who called Demi and Wilmer’s break-up something that happened at the right time.

“It’s probably the best timing for everybody,” Nick told Entertainment Tonight. “I’ve built an amazing friendship with Wilmer over the years and I have so much love for him. Demi is one of my closest friends in the world so I’m here for her and for both of them really.”

The two have become closer than ever before now that they have hit the road. Could romance be in the air?

“Between being friends and then also becoming business partners now with our record label we started, I think we felt like it was the right time [to go on tour together],” Demi stated in an interview this past May. “Like, it was a good moment to take things to the next step as far as building our careers as performers, as artists, but also as business people.”

Demi Lovato and Nick Jonas are scheduled to wrap their tour on September 17.

Demi Lovato shows off her bikini body while enjoying a day by the pool with friends in Miami, Florida on June 30, 2016. Demi was taking a break from her Future Now Tour which she is co-headlining with Nick Jonas by FameFlynet