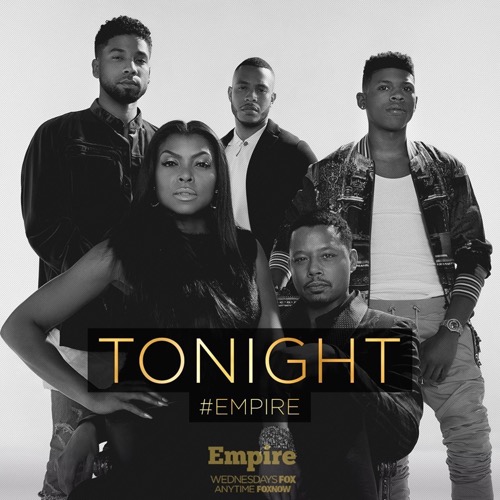 Tonight on FOX their blockbuster drama Empire airs with an all-new Wednesday, October 12, 2016, episode and we have your Empire recap below. On tonight’s Empire season 3 episode 4 Hakeem (Bryshere ‘Yazz’ Gray) develops feelings for Nessa, (Sierra A. McClain) even though she seems to have eyes for a different Lyon.

Did you watch the Empire season 3 episode 4 Cookie called in a favor with mega-superstar Kitty (guest star Mariah Carey) to record a new song with Jamal, hoping he would overcome his inability to perform.  If you missed it we have a full and detailed Empire recap, right here!

On tonight’s Empire episode 4 episode as per the FOX synopsis, “Things heat up between Cookie and Angelo (guest star Taye Diggs), so Lucious finally recognizes Angelo as a formidable rival and prepares to take him on. Meanwhile, Jamal is finally able to face Freda Gatz, a big first step on his journey to recovery.”

Tonight’s episode of “Empire” kicks off with Lucious and Andre heading to a pretty rough neighborhood to sit down with Nessa and go over her contract at Shine’s studio. Andre is taken aback by Nessa – it’s the first time that he has ever seen her. Lucious is shocked when He learns that Shine has invited half a dozen other labels over to hear Nessa sing, and they are having a “good old fashioned bidding war” over Nessa.

Lucious heads back to Empire and is furious. He freaks on Becky for not closing Nessa’s deal weeks ago. Becky tries to explain that it wasn’t her job – that is the head of A&R’s job, she tried to apply for it but Cookie hired someone from the outside named Xavier. Cookie arrives and she and Lucious exchange words, and have nothing nice to say to each other.

Cookie is rushing through the halls with her assistant in tow and a group of little kids stop her and play her a song that they have been working on. Apparently, Angelo brought them to serenade Cookie. He invites her on a date later that night to see his friend Gia singing. Cookie confesses to her assistant that Angelo is a gentleman and he reminds her of her first boyfriend Barry.

After Angelo leaves, Lucious hassles Cookie. He gets inside her head and says he doesn’t want to see her get hurt – but Angelo is an important guy. Lucious heard that Angelo might be running for mayor, an he won’t be able to do that with a convicted felon on his arm.

Hakeem hears about Nessa’s contract issues – he reassures Lucious that he and Nessa are friends and he can get her to sign the deal. Before Hakeem and Andre leave Lucious’ office to talk to Nessa – Andre takes Lucious aside and tells him that Jamal is seeing Freda in jail.

Later that day, Jamal heads back to the prison, and he has brought along his new friend Philip from the PTSD group for moral support. Jamal is shocked when he sits down with Freda and she is unrecognizable – she was badly beaten and eye is swollen shut. Jamal feels horrible, he wants to help her get moved to a different prison.

Hakeem decides to throw a party and invite Nessa and Shine over – they livestream the whole thing on XStream. Of course, Hakeem is feeling cocky and he writes on a napkin that Empire is going to offer Nessa $2.5 Million. Shine grabs the napkin and holds it up to the camera and broadcasts across the internet how much Empire is offering. This is not going to go over well in the bidding war.

Cookie heads out on her date to meet up with Angelo. She’s dressed for a night out on the town – and shocked when she learns that the singer they are going to see is at the opera. The event is actually a fund-raiser and everyone is dressed in tuxedos and ballgowns. Cookie is feeling totally out of place and self-concious. She heads to the bathroom and overhears girls gossiping about her and calling her a hoodrat. She threatens to “whoop their asses” and then stomps back out to find Angelo.

The next day at work, Tiana arrives and is furious over Hakeem’s diss. Apparently, Graham promised her fans a response to Keem’s diss, and Tiana is over it, she is sick of having two guys fighting over her like little kids in the sandbox, she’s an artist, not a reality TV star.
Meanwhile, Jamal meets up with Angelo. He wants Angelo to help him get Freda out of jail. Angelo thinks they should consider Freda pleading temporary insanity. Angelo promises to get Jamal in touch with a good lawyer who might be able to help Freda.

Andre pays Nessa a visit by himself. He reveals that he knows her brother that passed away, and all about Shine taking her in – but its time for Nessa to take back her life, and get what is rightfully her’s. Andre points out to her that Shine is just exploiting her and she will make a horrible mistake if she doesn’t sign with Empire.

Andre’s meeting with Nessa proved effective and she signed the contract. Shine arrives at Lucious’ office and freaks out, he and Andre throw a few punches and guns are drawn. Lucious holds a gun to Shine and forces him to sign the contract too. Looks like the bidding war is over and Empire has won.

Jamal and Freda head to see the judge with the new liar. They argue temporary insanity and Jamal speaks on her behalf – the judge agrees to grant her bail until trial. It looks like Freda is getting out of prison.

Cookie was inspired by her trip to the opera with Angelo. She brings Gia the opera singer down to the studio to perform a clapback song with Tiana – she stream it live on Xstream. Tiana makes it pretty clear that she isn’t Team Graham or Team Hakeem. Angelo joins Cookie in the studio to check out the new music.

Lucious arrives, and he can’t help but rattle Angelo. He takes Angelo aside and reveals that he gave Cookie her nickname, Lucious brags about beating up her boyfriend Barry back in the day. Lucious taunts Angelo and says that he and Cookie “always find their way back together again.”

Lucious isn’t done getting talking crap though – he bumps in to Andre next. Lucious brags that Freda played him, Lucious apparently had Freda beat up in jail because he knew that was the only way that they would release her. And, Lucious knew that Andre would argue she was out of her mind, and that means that everything Freda said about Lucious is not credible either. Jamal heads home and he is obviously upset about his chat with Lucious, his friend Philip pays him a visit to check in on him, and he lectures Jamal about mixing his painkillers with alcohol.

Tonight’s episode of Empire ends with Nessa paying Andre a visit at his office late at night – they share a kiss and things start getting hot, then Andre pulls back, he starts having flashbacks of Rhonda again. Rhonda’s ghost gives Andre a pep-talk and encourages him to have sex with Nessa on his desk.